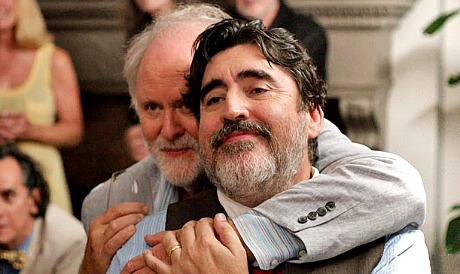 Early this morning Longworth tweeted that the following are her Best of 2014 selections: Lukas Moodyson‘s We Are The Best (Swedish teenaged alienation piece…14 year-old girl rockers…raucous and respectable…watched 2/3 of the screener, will watch the remainder today or tomorrow), James Gray‘s The Immigrant (Darius Khondji‘s amber-lit photography and the general production values are top of the line, but the pace is slow and the story is a ho-hummer), Gina Prince-Bythwood‘s Beyond the Lights (never cared to see it and I’m not alone in this), Listen Up Philip (bamboo chutes jammed under fingernails), Under the Skin (I know it’s a big favorite among some but I found it mostly agonizing), Force Majeure (saw it in Cannes…40ish dad guilt-tripped by mom for running for cover from an avalanche without looking to save the kids first…meh), Stranger By The Lake (too many fresh-air erections), Inherent Vice (seen it twice, never again), Tales of the Grim Sleeper (watched it, waited, never felt the juice), Love is Strange (kindly, compassionate, enervating…not much of a pulse…almost a meh) and Snowpiercer (knocks you out conceptually during the first 65%, says the right things but says them over and over again, but the obsessively violent conflicts and blood stylings wear out their welcome)

I completely agree with Longworth’s choosing of Laggies, The One I Love and Only Lovers Left Alive as among the year’s best. She also selected Bird People, but to my discredit I never saw it.

December 31, 2014by Jeffrey Wells18 Comments
« Previous post
Schultz Suddenly Enraged At Foxcatcher and Miller Over Homoerotic Undercurrents
Next post »
Away From The Revelry