This Star Wars family portrait painting has been commented upon elsewhere, but I wanted to show it to those who haven’t bought the Star Wars Bluray set (which I still haven’t seen, being without a Bluray player or large high-def monitor during my New York visit) and just say for the record that this is the most concise visual expression of the 21st Century mind of George Lucas that I’ve ever seen. 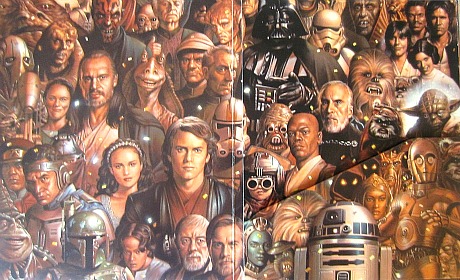 The ruthless, power-mad dark side vs. the serene and illuminated spirituality of the Jedi delivers the key dramatic tension of the Star Wars films. By any common standard these two poles are most memorably represented by Darth Vader and Alec Guinness‘s Obi-Wan Kenobi, or Mark Hamill‘s Luke Skywalker.

But who is the biggest front-and-center presence in this collage? The giver of one of the most agony-inducing high-profile performances in the history of big-budget epic movies — Hayden Christensen.

And where are the truly legendary characters who toplined the original Star Wars and especially The Empire Strikes Back, by far the finest film in the series? Let’s see…oh, there they are, all tucked away in the top right-hand corner, like vaguely unwanted guests at a wedding who’ve been seated at a table next to the kitchen with the waiters running in and out and the door swinging open and closing, over and over and over.

The collage basically says that the prequel guys, including Jake Lloyd and Jar-Jar Binks, are the core of the legend and the franchise, and that everything of lasting or profound value in the series stems from those three movies and their stories. Good Heavenly God!

Why are there two Chewbaccas? I realize that “Chewy” is part of a wookie race but still.