Sidney Lumet‘s Before The Devil Knows You’re Dead (ThinkFilm, 10.26) is, for me, a major Toronto Film Festival revelation…a knockout. It’s a New York family crime drama like nothing Lumet (83 friggin’ years old and cooking with high-test like he was in the ’70s and ’80s) has ever attempted, much less achieved. And with a killer cast giving exceptional perfs — Phillip Seymour Hoffman, Albert Finney, Ethan Hawke, Marisa Tomei. It’s like something out of Shakespeare or Greek tragedy…it’s the House of Borgia. And a great suspense film to boot. 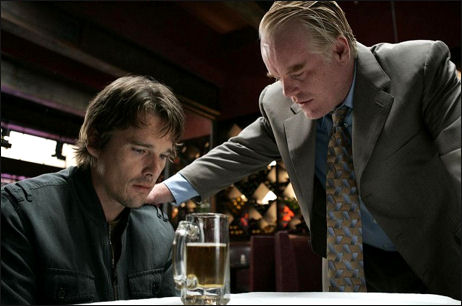 I don’t have time to get into this now (have to hit the I’m Not There party and then another film) but I’ll elaborate tomorrow. But I immediately knew this would be exceptional. How did I come to this conclusion? I figured any film that starts off with a naked Hoffman doing it doggy-style with a naked Tomei — a “whoa!” shot if I’ve ever seen one — has to be dealing from a fairly exceptional deck.

“An intricate tragedy that plumbs messy emotional depths with cinematic precision, Before the Devil Knows You’re Dead explores urban malaise via ingredients so timeless, an ancient Greek stumbling into the theater would recognize the building blocks of mortal folly. Filial impiety, sibling rivalry, marital distress and crippling debt bedevil protags who shop for all their decisions at Bad Choices ‘R Us.

“Satisfyingly draining narrative will probably skew toward older viewers, but the wrenching tale has something for anyone who likes their melodrama spiked with palpable tension and genuine suspense.”