“Right now, at this point in history, it is more important to have our first black president than our first woman president,” director Rod Lurie (Nothing But The Truth, Resurrecting The Champ) has written in a 2.22 Huffington Post opinion piece. 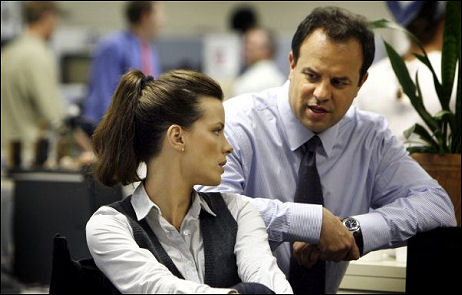 Kate Beckinsale, Rod Lurie during filming of Nothing But The Truth

“There have been many nations that have had female leaders. But there are very few, if any, that have elected a member of their ethnic minority to lead them,” Lurie states. “Were we to put Hillary in office, the world would shrug their shoulders and say ‘finally.’ Put in Obama, and we lead by example.
“We are viewed by the world as a quasi-racist state in which we allow natural disasters to obliterate our minority community, in which our penal system is designed to treat blacks unfairly, and in which we let the medical and educational systems in our ghettos fester to the level of some third-world countries.
“The election of Obama will say as much about the American people as it does about Obama himself — that our Declaration of Independence means what it says in its opening lines, that being the world’s greatest nation means that we offer the world’s greatest opportunities.
“It is no shock that, with the exception of Great Britain, polls in every European nation favor Obama over Clinton. And don’t tell me that what the world thinks doesn’t matter. Because how the dollar performs overseas matters. Our ability to form military alliances matters. How we team up economically and scientifically with China matters.
“Simply put, the issues that afflict blacks are in more urgent need of our attention than those (very real) issues that matter to women.”