Lurie “thinks” his movie is about, etc.

“I think this will resonate,” Resurrecting The Champ director- writer Rod Lurie has told the Pasadena Weekly‘s Carl Kozlowski. “I think the movie is about a group of people, journalists, who police themselves like no other profession. No other group is as vigilant about maintaining its honor and that’s what I like. Journalists do mea culpas all the time.” 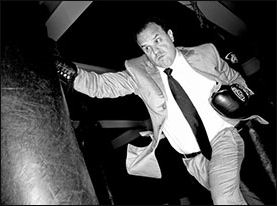 Lurie “thinks” his film is about self-policing journalists? What happened here is that sometimes people say “I think” when they really mean “this is how it is.” The prob- lem came with the editing of the article. Any journalist or editor who knows about making quotes and subjects sound right would have removed that second “think.” I think the Pasadena Weekly should have thought this one through.