I asked a Focus Features publicist earlier today to explain exactly what had prompted the MPAA’s ratings board to give Ang Lee‘s Lust, Caution an NC-17 rating. The official statement blamed “some explicit sexuality” but what was the actual depicted offense or offenses? The publicist declined to be specific but used terms like “hot,” “fucking sexy,” “aggressively sexual” and the like. He also sent over a statement from Focus honcho and Lust, Caution co-writer James Schamus that said Focus Features “accepts the MPAA’s NC-17 rating without protest.” 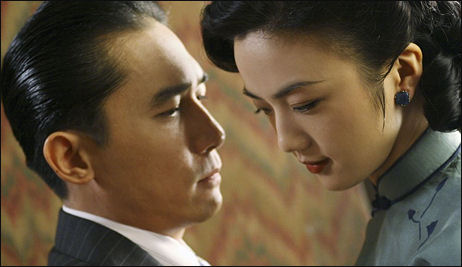 In the film’s production notes, says Variety, Schamus has “likened the lead femme character to Maria Schneider‘s role in Last Tango in Paris, another sexually explicit pic that received an X rating for its 1973 release and was subsequently rated NC-17 for a homevideo reissue.”

Oh, I get it. The NC-17 rating is about something “to stick in your weah, my deah.” What other Tango parallel could Schamus be alluding to? Savoring the eating of a dead rat’s asshole because it tastes good with mayonnaise?

The Hollywood Reporter‘s Gregg Goldstein managed to dig up a quite from a Focus Features rep that alluded to the MPAA having had problems with numerous “pelvic thrusts.”