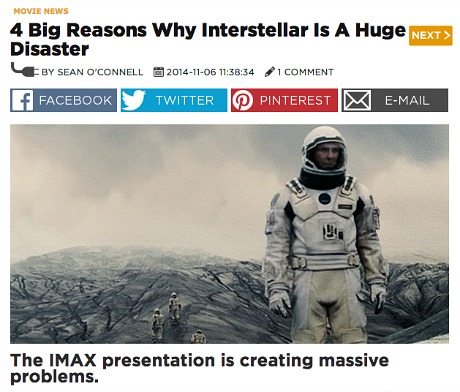 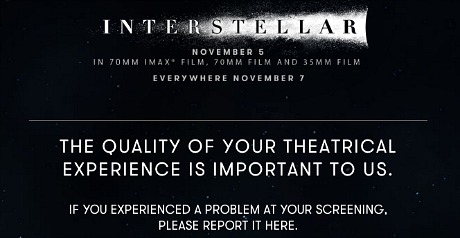 From Cinema Blend‘s Sean O’Connell: “At our screening, the audio mix on the Interstellar presentation was so off, I had to ask a colleague if the speakers in our house were broken. There was a recurring buzz from the speakers in the mix. It would arrive during certain scenes, linger for a few minutes, then disappear. Our screening wasn’t an isolated event.”

From an 11.6 “My Two Cents” column by Digital Bits editor Bill Hunt:

“And a word about Christopher Nolan’s Interstellar: I don’t want to post a review of the film yet, because I think you really need to see it yourself and form your own opinion. I’ll just say that I had decidedly mixed feelings about the film. However, the one thing I do want to note is that Dr. Jahnke and I experienced a problem with the audio at the 70mm screening we attended last night (at the Cinerama Dome in Hollywood) and it’s apparently widespread. The problem is that the film’s score seems to be mixed too high, so that you lose lines of dialogue here and there – every so often, the character’s dialogue becomes almost inaudible. If you encounter this, report it here at the official website. Hopefully, that will encourage Nolan and company to get this fixed ASAP.”

November 7, 2014by Jeffrey Wells54 Comments
« Previous post
Shorter Babadook, a.k.a. Monster
Next post »
Flies in The Face of Evil