Obviously the Masters of Cinema guys who prepared the double-disc Bluray release of Orson Welles‘ Touch of Evil didn’t get the memo from the 16 x 9 fascists that all 1950s films have to masked at 1.85 or 1.78 to 1 because that was how they were shown from 1953 on. 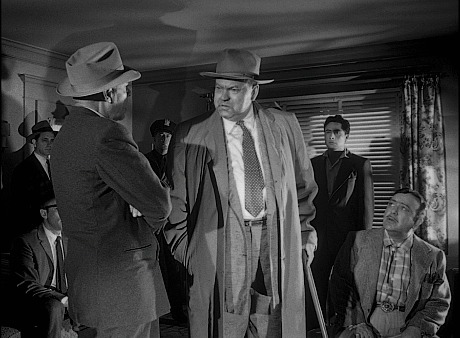 Who needs the boxy headspace in this frame-capture of the 1.37 version of Touch of Evil, right? Whack it down, the fascists say. Put those actors in a 1.85 or 1.78 jail and keep them there! 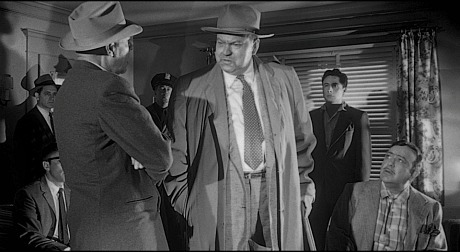 I’m hereby inviting those who’ve been insisting in past discussions that 1.78 or 1.85 to 1 croppings are the only way to go with ’50s and ‘early to mid ’60s films (guys like Joe Gillis and C.C. Baxter and A Pop Calypso and BadHatHarry and lawnorder and, yes, the eminent Robert Harris) to write a letter of public scolding to the Masters of Cinema team.

These guys need to explain in detail how the MofC techies were wrong and misguided and perverse to offer 1.37 versions of this Orson Welles classic along with 1.85 versions. Because they were…right? I mean, who needs this boxy shit? Whatever possessed the MofC guys to even consider including 1.37 versions? Are they wise guys? Have they been reading our explanations on this site over the past few years that 1.78 or 1.85 croppings are the only way to go or haven’t they? 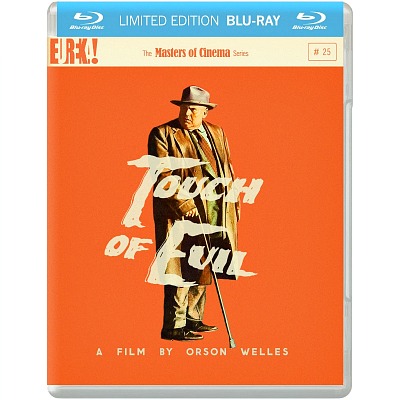 From DVD Beaver’s description: “Quite a phenomenal package from The Masters of Cinema. This is 2 dual-layered Blu-ray discs — the first has the 1 hour, 51-minute long 1998 reconstruction of Touch of Evil offered in both 1.85:1 and 1:37 aspect ratios. The widescreen version has a 2008 recorded optional commentary by the restoration producer, Rick Schmidlin.

“The full-frame version has the 1999 recorded optional commentary with Charlton Heston, Janet Leigh and Mr. Schmidlin. Sharing that disc are the two video extras; Bringing Evil to Life [21:00] and Evil Lost and Found [17:06] as well as a theatrical trailer (which includes alternate footage) — all three video extras in 480i.

“All commentaries and digital extras are found on the 2008 50th Anniversary DVD from Universal. So we get the theatrical in the optional 1.37:1 and the image and audio in HD and a magnificent 56-page booklet featuring essays by Orson Welles, Fran√ßois Truffaut, Andr√© Bazin and Terry Comito; interview excerpts with Welles; a timeline of the film’s history; and extensive notes on the film’s versions and ratios.