At the 40-second mark in the just-released traiier for Stephen Daldry‘s Extremely Loud and Incredibly Close (Warner Bros, 12.25), we see Thomas Horn, who plays the son of Tom Hanks and Sandra Bullock, react to the sound of an overhead jet. As this is a 9/11-related drama, it’s naturally presumed that Horn is hearing (and perhaps seeing) American Airlines #11, the Boeing 767-223ER jet that hit the North Tower at 8:54 am that morning. 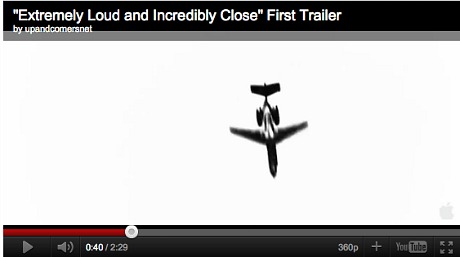 But the jet we briefly see in the trailer has twin engines mounted on the rear of the fuselage — a characteristic of an MD-80 jet. Boeing 767 engines are mounted on the wings. So…I don’t get it.

Presumably this is an error that’s exclusive to the trailer, and that everything will be fixed when the film appears three months hence. (It’s inconceivable that Daldry could make a mistake this obvious and elemental in the film itself.) But it still boggles the mind that persons involved in assembling the trailer chose to use footage (or a CG simulation) of a flying MD-80 jet when they had to know that people like me would spot this right away.

Even if the portion of the trailer in question is based on a sequence in the film in which Horn is looking at some random jet passing over and imagining that it’s one of the two jets that hit the towers, it’s needlessly misleading to show us an aircraft of this type, certainly in the context of a trailer in which the information and associations are expected to be simple and direct and easy to process. What could possibly be the point?