My first reaction to the death of George McGovern, 90, was “this was a good and principled man of honor, rock solid to the end.” Then I recalled how McGovern was always great in front of a mike — he always had his facts down and his patter was always sharp. Then I remembered the comfort after briefly chatting with him in ’05 when he attended a Laemmle’s Music Hall screening of Stephen Vittoria‘s One Bright Shining Moment: The Forgotten Summer of George McGovern.

McGovern, then 83, “seemed to be in excellent health — tanned, trim — and he told the crowd he wants to live to be at least 100,” I wrote. “He needs that much time, he said, to accomplish all his goals, which include doing what he can to eliminate hunger in third-world countries.”

Here’s the piece in its entirety:

Every now and then you need to take a break from all the Hollywood crap, and I got a really nice one last Saturday from an encounter with former U.S. Senator and 1972 Democratic Presidential candidate George McGovern. In so doing I felt an emotion that I haven’t had much contact with lately. I felt a kind of familial love.

The occasion was an early-Saturday-evening showing at Laemmle’s Music Hall of Stephen Vittoria‘s One Bright Shining Moment: The Forgotten Summer of George McGovern, which I’ve been trying to catch since last July or so, when I happened to see a poster for it in the lobby of Manhattan’s Quad Cinema.

I’ve always admired McGovern, the longtime South Dakota liberal who’s mainly known for his honorable but catastrophic run against President Richard Nixon. Hurt by a campaign that was chaotically managed and also unlucky, McGovern got less than 40% of the vote and took only two states, Massachusetts and the District of Columbia. 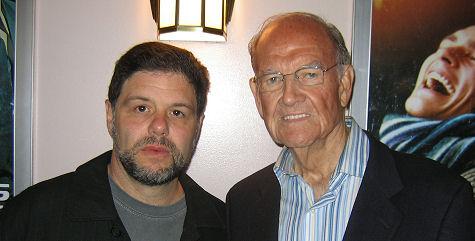 I’ve long respected McGovern for having theoretically guided the last plain-spoken, genuinely liberal Democratic Presidential campaign. But my affection has mainly been about a long-held feeling that profound currents of decency and compassion run within him.

It sure felt that way as he spoke to a middle-aged crowd that had just seen Vittoria’s film around 7:30 pm, and later as he posed for photos and signed autographs and whatnot in front of the theatre on Wilshire Blvd.

He’s been the World Food Program’s first global ambassador on hunger since ’01, and before that served as U.S. ambassador to the U.N. Food and Agriculture Agencies, based in Rome, Italy, from ’98 to ’01.

He said that his favorite line in Vittoria’s doc is when Gloria Steinem says that looking back on the ’72 campaign, the McGovern loyalists have a lot more to be proud of than do the supporters of Nixon’s campaign, who have all that Watergate-related skullduggery to contend with.

Salon‘s Andrew O’Hehir recently wrote than “when the long lens of history finally focuses on McGovern’s contentious era, he’ll appear in the main text, named as a prophet, while Nixon will be a twisted king consigned to the footnotes.” 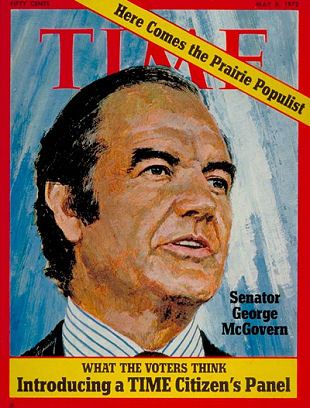 But when asked last Saturday evening what he thinks about the George Bush, McGovern said he’d rather have Nixon there.

Nixon, he pointed out, was fairly practical and forward-thinking on domestic issues and the economy. He created the Environmental Protection Agency, advocated gun control, imposed wage and price controls, and believed in a federal health-care system. And he wasn’t indebted to the neocons and their absolutist agendas.

Vittoria’s film is, for my money, a little too admiring, strident and one-sided. I wish he’d talked to some conservatives and maybe even a former enemy or two. It would have given the film some added intrigue without compromising McGovern’s image.

Some liberals still flinch at the memory of the ’72 campaign, but when a man has lasted as long as McGovern has and consistently stood for caring and compassion in public affairs, what’s not to admire? We’re speaking of one of the most steadily principled men to succeed in big-time politics in the 20th Century.

McGovern and admirers on sidewalk in front of Laemmle’s Music Hall on Wilshire near Doheny — Saturday, 11.19, 8:25 pm.

The Village Voice‘s Michael Atkinson has complained that Vittoria’s doc is filled with “exactly the sort of starry-eyed, bullet-spraying hyperbole that drains credibility from any brand of political discourse,” adding that it “may be useful as home-front history, if only it didn’t rant, yowl, and wet its pants so much.”

Still, it’s a good thing to have a film out there that doesn’t just train your attention on who George McGovern really is and was, and what his campaign was all about, but which pays the proper respect.”

If only the yahoos had the wisdom to elect McGovern instead of Nixon 40 years ago. In a pig’s eye.