Calling, calling, calling around to try and understand why Bob Weinstein‘s Dimension only yesterday decided to pull the plug on the 7.20 release of All The Boys Love Mandy Lane, a kind of Ten Little Indians/ Cabin Fever-ish slasher film with Amber Heard, Anson Mount, Michael Welch, et. al. A Weinstein Co.publicist told me that no alternative release date has been set. 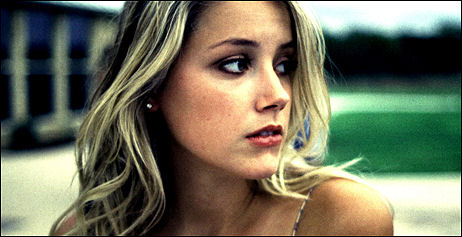 There have been indications over the least two or three weeks that Dimension wasn’t working all that hard at promoting this unrated, 88-minute film. When a distributor decides on a release date change it’ll usually be announced a month or more in advance, but suddenly yanking a film eight days before the announced release date with no substitute date mentioned is pretty much without precedent. There was an L.A. screening last Tuesday (7.10) that I missed; the two screenings that were scheduled for next week (Monday, 7.16 at the ESP Culver Plaza Theatre, and Tuesday, 7.17 at the Clarity) have been cancelled.
All The Boys Love Mandy Lane was first shown at last September’s Toronto Film Festival, so it can’t be a matter of the film being unspeakably bad. My first thought when I heard the news was probably the same as everyone else’s, to wit: the current down cycle in torture-porn/slasher films gave the Weinstein brothers the willies, and one of them woke up at 3:30 ayem a week or two ago and said, “We have to yank it and shelve it until further notice! We’re hurting as it is, and we can’t spend any p & a on a genre film that no one wants to see right now.”
There’s an interesting story here but something tells me I’m not going to nail it this afternoon.