Marc Norman’s “What Happens Next”

In a “Big Picture” column piece based upon Marc Norman‘s “What Happens Next: A History of American Screenwriting,” a book that came out last week, L.A. TImes guy Patrick Goldstein says Norman “isn’t especially optimistic” about relations between screenwriters and studio execs over the coming years, primarily because “the old studio patriarchs have been replaced by executives who think they’re more in touch with the public taste than most writers. 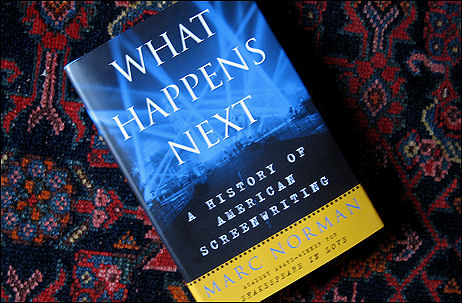 As Norman puts it, “There’s now a generation of executives who wonder why the writer couldn’t be more like a court stenographer who can just put the executives’ ideas into writing,” says Goldtsein. Hey…wasn’t this precisely the attitude of Peter Gallagher‘s Larry Levy character in Robert Altman‘s The Player. Remember that creative-meeting scene when he asks an assistant to read stories from a newspaper at random, and Levy explains how each story could be a movie with the right attitude and ingredients?

I received Norman’s book in the mail the same day that Goldstein did, probably. I started to flip through it a couple of times but something always came up. How many hundreds of thousands of people regard the words “something came up” as the story of their lives?