Two and a half hours after it finished screening in the Grand Palais, Lee Daniels‘ The Paperboy is being primarily spoken of as the Nicole Kidman-pees-on-Zac Efron flick. Her line before she does so — “If anyone’s gonna pee on him, it’s gonna be me” — is also tweeting around. 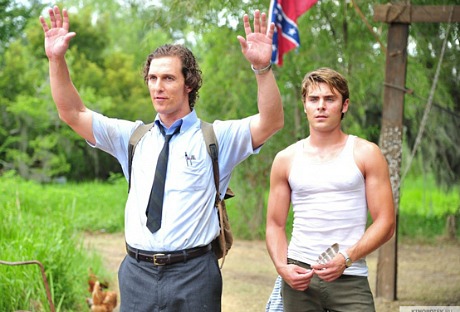 In other words, the press gang at Cannes thought The Paperboy was mostly a joke. Which is what Daniels apparently intended on some level — to flavor or season it with foolery. I love it when referenced goof humor is thrown into a drama, but the film has to be believable in the usual ways — you have to accept the bedrock reality of the story and characters — but almost all of The Paperboy reeks of fake. Bits and flourishes are pasted on and thrown at the wall. The result is something sloppy, inept and — sorry — appalling.

Defenders (like Guy Lodge) have called it a camp classic and…whatever, an instant midnight movie for stoners. I actually think it might find some traction in this vein. But most reactions have been mocking and derisive. The response at the end of the 8:30 press screening went beyond boos. A guy somewhere to my right got a case of the giggles around the two-thirds mark and couldn’t stop…”Hoo-hoo-hoo…oh-hee-hee-hee!”

Daily Telegraph critic Robbie Coll called it “the first bona fide fiasco of the festival. So bad it has to be seen to be believed. Transcendentally shambolic.” MSN’s James Rocchi said “it makes A Time To Kill look like To Kill A Mockingbird.”

You might have read that the subject of The Paperboy, set in a Florida backwater in 1969, is about a pair of Miami Times reporters (Matthew McConaughey, David Oyelowo) and McConaughey’s younger brother (Efron) trying to get a redneck, alligator-skinning cracker (John Cusack) off death row at the request of a local Barbie Doll floozy (Kidman) who’s fallen in love with Cusack and is convinced of his innocence. 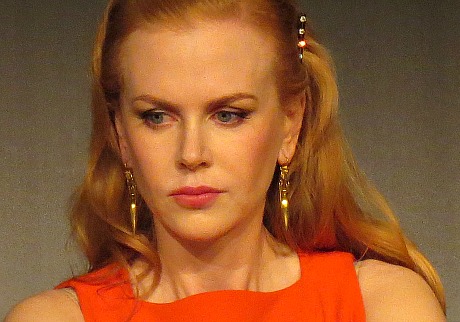 Some of the plot points in Pete Dexter’s 1995 novel have been changed. Kidman relentlessly flirts with and then finally schtupps Efron in the film, but has it off with Oyelowo’s character, Yardley, in the book. And Yardley fabricates parts of his Miami Times story, which the film bypasses, or so I recall. But The Paperboy is mainly about what Daniels wanted to get into and particularly the people he’s known in his life.

“All these people [in the film] are people who live in my head, my world and my existence,” he said this morning.

The peeing scene happens when Efron is badly stung by jellyfish during a swim in the Gulf of Mexico. Three girls come to his aid as he stumbles out of the water and suggest the peeing remedy (the acids in urine work as an antidote to jellyfish poison), but then Kidman comes over and angrily shoves them away and says her famous line.

Dexter’s book invented the pen-pal love affair between Kidman’s Charlotte and Cusack’s Hillary Van Wetter, but, as I said this morning, “Kidman’s girly-girl might enjoy a sexual dalliance with a Deliverance-style redneck stallion, as played by Cusack. But not marry — no way.” Girly girls like their lives to be nice and pretty and pink and tidy, and Cusack lives in a swamp in a skunky old shack. Doesn’t wash. 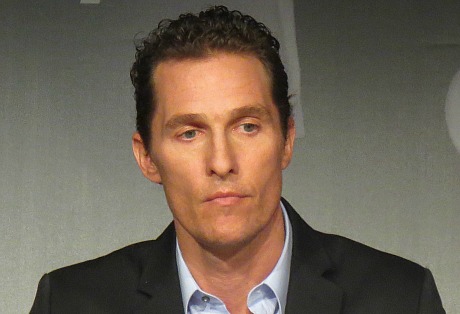 And to get to Cusack’s shack, which he shares with his father and other family members, McConaughey and Efron have to boat through a swamp and then wade through thigh-deep water. The shack isn’t directly accessible by motorboats with a pier in front? When the family goes to buy groceries and other necessities they have to carry their shopping bags and whatnot through swamp water?

Efron is a sexually repressed kid (or so says Kidman’s Charlotte) who doesn’t have any girlfriends. Because, you know, he’s not good looking enough to score. Right.

The story is narrated by a maid (Macy Gray, the most likable, dignified and straight-talking character) who works for Efron’s family, but her character isn’t privy to a lot of what we’re shown and yet she’s in on every detail, including when and where Kidman and Efron have it off. Her narration is cloying and at times painful

The movie is full of little “what?” moments like these. I was physically flinching at some of them.

Pedro Almodovar wanted to make a Paperboy movie but “opted out if it,” Daniels said in the press conference.

The $12.5 million film was shot in Los Angeles and New Orleans, it says here. And Kidman had to do her own makeup, she said this morning. She did a good job. And her performance is spirited. Give her that.