“Peter O’Toole was utterly, sensationally hilarious on “Late Night with David Letterman” last night. He looks frail, but not at death’s door. I can’t imagine his fantastic story of his adventures getting sloshed with Peter Finch was a calculated reminder of a Peter who won a posthumous Oscar — the whole thing seemed far too spontaneous. 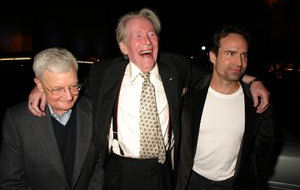 “If he can keep up these jovial, witty appearances, which remind people he’s utterly one-of-a-kind, it can only do him good. Bear in mind that, 43 years ago, many people thought his American talk show appearances at the time of Lawrence of Arabia, especially when he allegedly turned up embarrassingly drunk on Jack Paar‘s Tonight Show (I didn’t see it), probably cost him the Oscar he deserved then.
“It would be worth checking, but I don’t believe he’s ever attended the ceremonies as a nominee, also something that doesn’t endear Academy members to you unless you’re Katharine Hepburn. It’s an uphill battle, but I really hope he wins.” — Variety critic Todd McCarthy.