Late start (I’m tapping this out from a McDonald’s in West L.A. between sips of black, stomach-searing “premium roast” coffee) and lots to get into. But first I have to drag myself out of this neon-lit formica hell hole, and it’s hard to do that because I keep thinking of one more thing to say or post or link to. 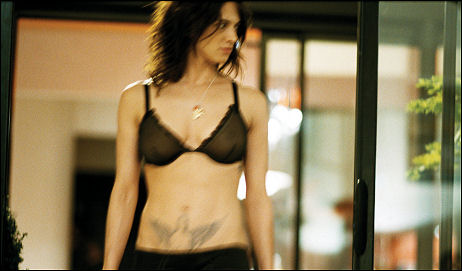 I’ll definitely get into Young @ Heart, a doc about a late-in-life singing group (“singing” being a different thing than “signing,” as in the signing of checks) that is easily — easily — the most emotionally affecting film of the year, although it can’t qualify, sad to say, for a Best Feature-Length Documentary Oscar due to an ’06 British TV airing. Doesn’t matter. Essential viewing either way. Because we’re all going there, and because we all need to sing.
And Kimberly Peirce‘s Stop-Loss, the best film opening this weekend (and an Iraq War-related that deserves, for once, to be discussed without mentioning the emphatic non-interest in this general topic among Gorilla Nation filmgoers).
And Olivier Assayas‘ Boarding Gate, a moody, offbeat Paris-Hong Kong thriller with Asia Argento that I finally caught last weekend and turned out to be much, much than expected.
I just can’t get into this stuff while sitting in a McDonald’s. You’d think they’d offer free wi-fi but nooo — you have to pay $2.95 for two hours. Everyone eating here is from a budget-conscious socio-economic strata. There’s a guy sitting two tables away who sounds like he’s close to having a heart attack, what with the red face and the heavy panting that just keeps going and going. People should show respect for others in a public place by putting a lid on this stuff. No groaning, coughing, moaning, nose-blowing or hyper-ventilating. Keep it together already. I’m trying to write here. You don’t see Starbucks customers going through their death throes.