In a just-up interview with The Tragedy of Macbeth‘s Joel Coen and Frances McDormand, Deadline‘s Michael Fleming tries to detour them by asking about producer Scott Rudin, with whom Coen and McDormand have worked many times.

Fleming mentions something he’s heard about Coen and McDormand having witnessed “a Rudin outburst toward an underling and not reacting.”

Toward the end of the Rudin discussion McDormand gets a little testy. She basically tells Fleming that they’re finished talking about Rudin, and that the interview may be over if he continues in this vein. Here’s the transcript.

Fleming: “[The Tragedy of Macbeth] was originally hatched with producer Scott Rudin, with whom you collaborated on in the Best Picture Oscar winner No Country for Old Men and other things. His name is not in the credits; he put himself on sabbatical after his bullying behavior toward subordinates was exposed by THR. His bullying was widely known in industry circles but presented and reframed by THR in this #MeToo moment, it created an outcry for him to be gone, despite him being an undeniable champion of taste-making subject matter like The Tragedy of Macbeth, which has always been hardest to get made. There was a report there that both of you witnessed an outburst by him toward an underling, and not reacting. It has nothing to do with what I just saw onscreen, but it is out there. What can you say about all this?”

Coen: “To work backwards from your question. I’ve made a number of movies with Scott over the years. I’ve known him since I started making movies, probably when he was head of production at Fox on our second movie, but if you look at all of the producers out there in the world, there aren’t that many who you would say, well, making an adaptation of Macbeth is a natural fit for the two of us. I mean, there’s Scott and then there’s nobody else that you would say that about. So, knowing him and having made movies with him, he seemed absolutely natural to go to with this, and in fact, he was. So, that’s that part of it.

“As far as the allegations and Scott’s behavior, yes, I think there isn’t anyone who works in the business who hasn’t heard those stories over the last however many decades that Scott has been working. Yeah. I hear stories about all kinds of people, I myself have witnessed all kinds of behavior. I never witnessed any of it with Scott, absolutely never. But on the other hand, I heard the stories and to a certain extent, I didn’t doubt the stories. I knew there was…you hear a lot of it and you figure a lot of it is probably true. But like I say, I hear stories about lots of people and I’ve seen questionable behavior from lots of people, but I never, ever saw anything like that from Scott. I don’t condone it, of course, but I never saw it.

“As far as people saying that we did, I just want to say this. I’ve been making movies for almost 40 years, Fran has been making movies that long, I think both Fran and I have reputations, and you can ask anybody we’ve worked with, for being aboveboard and honest, and the honest truth is I never saw it. So, I know I’m being honest about that. You can ask anybody who knows us whether they believe we’re honest about that.

“So from my point of view, whoever is saying we did see it is not being honest. So, that makes me skeptical of anything else that particular person might be saying.”

McDormand: “Joel, since you’re speaking for both of us, I would like to interject, since you’re speaking for both of us, that I think the most important thing that Joel has said is that we have worked with Scott for many years, we have not witnessed his disrespectful bully behavior to his employees, and what Joel has just said, anyone that questions our reputation should speak to us about that. Because I think anybody in that industry would not question our reputation when it comes…we do not handle ourselves that way professionally or personally. So I think that’s enough.

“And so I’m really interested, this article in Deadline…is it about the film? It is.”

McDormand: “And so, this question, I think, is not what the article is about, so I think we probably addressed it enough. Is there anything else you wanted to ask us?

McDormand: “No, about anything else?”

McDormand: [She smiles brightly]. “Oh, great. What is it?” 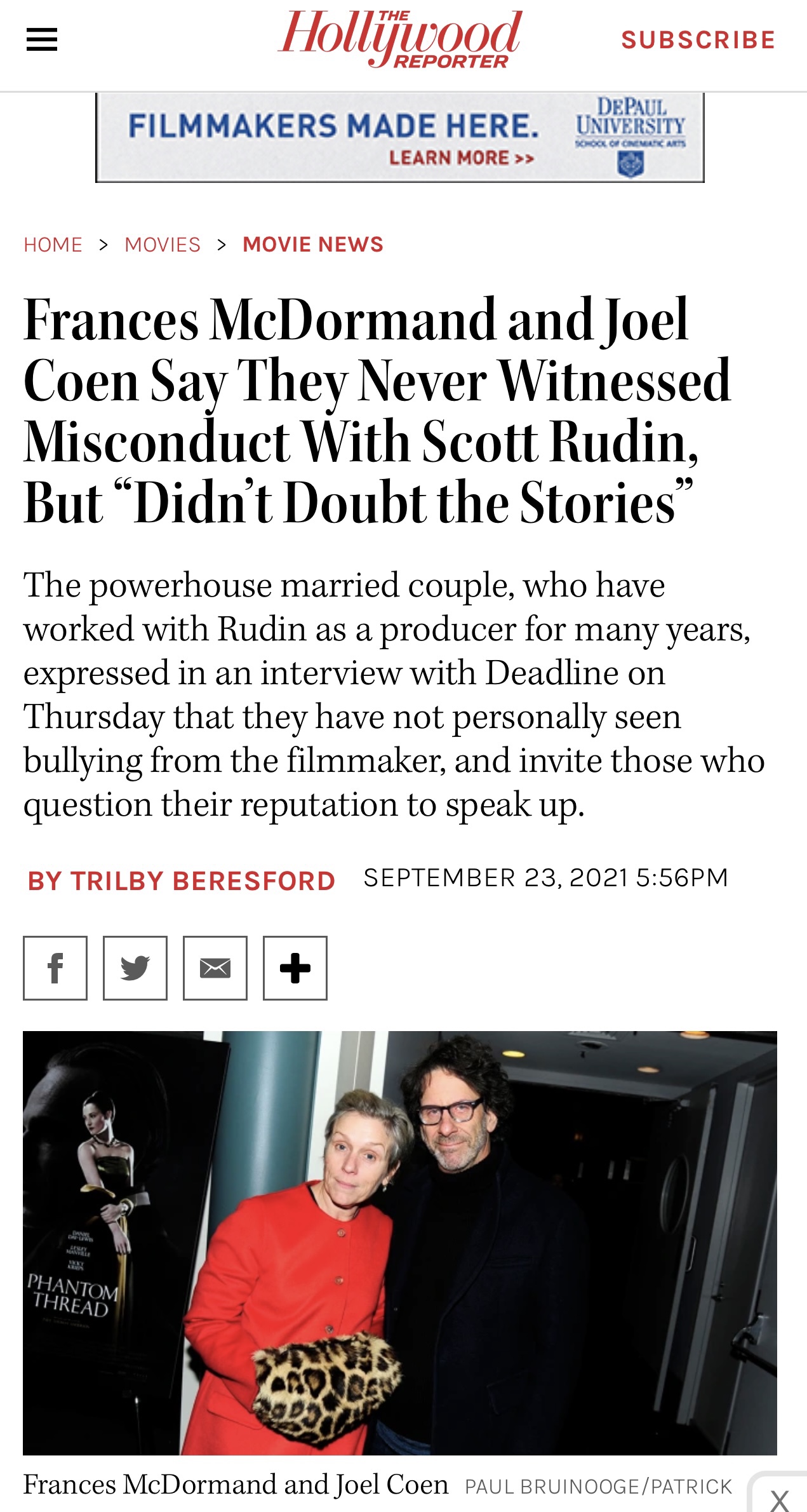