I’ll post my review of Tron: Legacy (Disney, 12.17) in a day or two, but let’s say for now it’s somewhere between an “okay, shrug, whatever” and not very good. If you’re an easy-lay geekboy you might tell your pallies it’s a stimulating fantasy by way of above-average eye candy. The first thing I said to Jett when it ended was “it was okay…meh.” But the more we talked about it the worse it seemed. Other guys were griping about it out in the lobby and on the sidewalk. 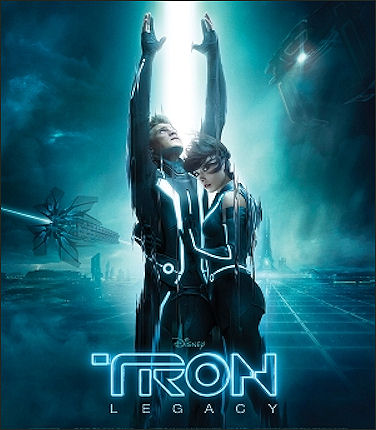 The script by Adam Horowitz and Edward Kitsis (i.e., the principle bad guys) is second-tier. The dialogue is somewhere between passable and lumpy, and some plot elements don’t hold up when you give them cursory think-throughs. Garret Hedlund‘s son-of-Jeff Bridges character (i.e., Sam Flynn) lacks the necessary panache — they’ve got him saying the same blah machismo lines that Bruce Willis used to mutter 15 or 20 years ago. To me, director Joseph Kosinki looks more like the new Peter Hyams than the new Jimbo.

Here’s one specific example of how it doesn’t work. Explaining involves revealing a minor spoiler. Ready…?

I’m speaking of a bit in which Bridges’ Kevin Flynn, the video-game maestro who disappeared into his own self-created realm (i.e., the “grid”) in 1989, overpowers a droid robot who’s telling him he can’t do something. So he bashes the top of the robot’s helmet with his fist and bingo — the robot reverses and retreats. This, of course, is a mixture of two bits from the original Star Wars. One, Alec Guiness‘s Obi-Wan using the Force to hoodwink two guard-droids into allowing his group to pass (“These aren’t the droids you’re looking for”) and two, Harrison Ford‘s Han Solo slamming the wall of the Millenium Falcon in order to get it to start. Both are classics, but the Bridges helmet-bash falls flat. This is what not-very-good movies do — they imitate good stuff but they can’t quite make their own versions “work.”