To hear it from Oscar-winning filmmaker Errol Morris, his new documentary about the Abu Ghraib prison scandal, Standard Operating Procedure (Sony Classics, 4.25 NYC, 5.2 in L.A.), basically says that U.S. soldiers based in Iraq who tortured and humiliated local terrorist suspects weren’t that bad. If you grade them on a curve, that is. Because we’re all that bad if given half a chance. We’re all about as decent and humane as the next guy until circumstances and dark guidance bring out our inner monster 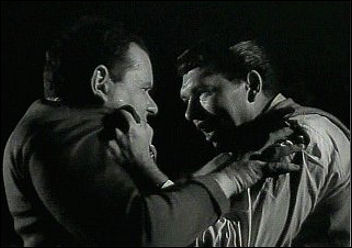 “I made a movie about people like yourself or myself trapped in the middle of this — people we never would have seen or would have forgotten about, who we just would have assumed are really monsters,” Morris told Defamer‘s Stu VanAirsdale. “And I’ve brought them back across the line back into humanity. And I think it’s an interesting story, and a human story.”
And a movie that is almost certainly going to die because Joe Average doesn’t want to know about this stuff. Who does? Boiled down, isn’t this aspect of Standard Operating Procedure repeating the same message as Rod Serling‘s famous Twilight Zone episode, “The Monsters Are Due on Maple Street“? Our willingness to turn on our neighbor when sufficiently motivated (i.e., scared)? Our capacity for malice and violence and savagery?
It’ll make for an interesting topic during my Errol sitdown tomorrow (4.10) at the Four Seasons hotel.