All About The Hammerheads

I was told yesterday afternoon to watch for a leap-out New York Observer piece about the Hollywood blogger/columnist. Called “Get Me Rewrite!” and written by John Koblin, it turned up last night at 11:39 pm. Ten minutes later I was going…this? It’s a scamper through the poppy fields, is what it is. 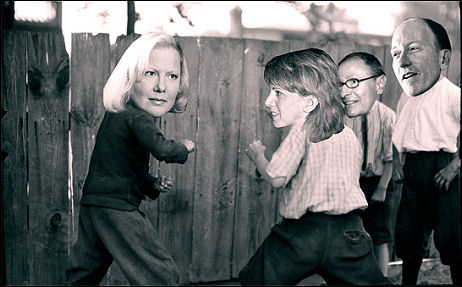 Drew Friedman‘s illustration of Alec Baldwin, Ashton Kutcher and Demi Moore in Walter Burns/Hildy Johnson/Front Page garb told me not to expect much, and so I wasn’t disappointed.

Boil the snow out of it and Koblin’s piece (a) summarizes that the leading Hollywood reporting blogs (as opposed to opinion/personality/reporting/cherry-pick ghoulash columns like my own, which isn’t mentioned) have pretty much elbowed Variety and the Hollywood Reporter aside; (b) recaps last month’s Nikki Finke vs. Sharon Waxman/The Wrap feud and that brief little dust-up between Patrick Goldstein and Variety‘s Brian Lowry; (c) includes some anti-Waxman views by the eternally dour Anita Busch, chiming in “from beyond the journalistic grave”; and (d) mentions that a slew of enterprising celebrity-actors (Kutcher, Baldwin, etc.) are churning out their own stuff on the Huffington Post. And that’s more or less it.

In short, Koblin’s view is that the most noteworthy online Hollywood coverage is more or less generated by the hammerheads — i.e., two hard-charging women who focus pretty much on the Hollywood economy, the labor disputes, the politics, the hires and fires, the agencies and all that trade jazz. Which are all fine and necessary but where’s the music, man? Waxman-Finke are but one piece of the pie. Goldstein, at least, is a serious film lover and all the more intriguing and readable for that.

Otherwise Koblin ignores not just HE but David know-it-all Poland and Movie City News, Variety‘s Anne Thompson , The Envelope, In Contention, the various seasonal currents, the flavor, the flow, Movieline, Awards Daily, and everyone else. 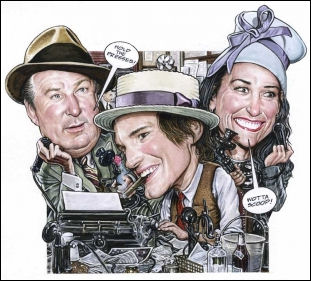 “Variety [has] ceded its grip on the town entirely,” Koblin writes, “and now the Hollywood press corps is in a state of revolution. There is no power structure. It’s all turned inside out and upside down. Everyone claims victory, but no one seems to have it, nobody is powerful enough to measure it. And, above all, it’s one nasty, mean, shrill place.”

Ex-Variety editor Peter Bart says that “for one thing, you have bloggers who need traffic and are desperate for attention. The overriding truth of the blogging community is they’re trying to figure out how to monetize their endeavors. So you have to call attention to yourself. On that side, you have a clear motive.”

“I do think it’s kind of surprising that Sharon Waxman even has a blog,” Busch tells Koblin. “I think she’s even one of the worst journalists I’ve ever encountered. I’ve never seen anybody that ignores the basics of Journalism 101 as she does. I find it surprising that she’s got this blog. I try not to click through on Sharon’s Web site because I don’t want someone who doesn’t care about journalism to succeed.” See what I mean? She just oozes the stuff.

Waxman says that she feels “sorry for Anita Busch for saying such a thing like that…I think that’s a pretty sad statement…I think it says more about her than me.” Waxman also unloads on Finke, to wit: “Nikki has her own view of reality which does not always accord to reality as others see it. The way she twists things and the way she always manages to bend the facts — and I put facts in quotes — is in a way that suits her.”

The L.A. Times was going to own Hollywood, Koblin writes, “but that never happened. The L.A. Times became hamstrung by too many internal conflicts (competing desks going after the same story, staffers upset that the website gives into celebrity link-baiting temptations) and, of course, a staff that is less than half the size of what it was eight years ago.

“And they suffer from a similar problem to Variety. Bloggers like Nikki Finke have been nimble and fast, and while an L.A. Times reporter is on the phone waiting for confirmation, Nikki puts it up regardless if it’s right or wrong.”

Busch gets in one good quote, though: “Hollywood is a small town filled with sociopaths. And when you’re assigned to cover that? You really have to be on your feet.”