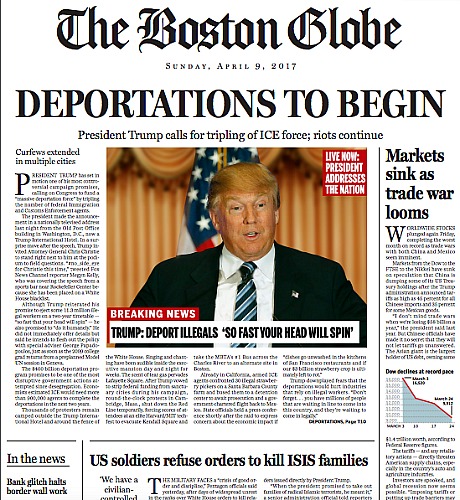 Boston Globe editorial: “For now, Republicans ought to focus on doing the right thing: putting up every legitimate roadblock to Trump that they can. The Republican Party’s standard deserves to be hoisted by an honorable and decent man, like Mitt Romney or Paul Ryan, elected on the convention floor. It is better to lose with principle than to accept a dangerous deal from a demagogue.”

Excerpt from 4.2.16 HE riff, “New Republican Goal — Defeat With Honor“: “It’s becoming more and more likely that the Cleveland gathering will be an historic shitshow in which Ted Cruz or John Kasich could overpower Trump on the second and third ballot. In so doing the Republican heirarchy will essentially be saying to all those rural, nihilistic, under-educated, over-60, pot-bellied, heroin-snorting Trump bubbas out there that the party’s over, fellas, and tough shit.

“Cruz would also lose against Clinton, of course, but if Kasich were to be nominated (a seemingly all-but-impossible scenario) he could emerge victorious. Either way the idea that seems to be taking hold is that Republicans need to at least lose honorably in the fall, and that means without Trump as a deciding factor.”