Run Through the Jungle

Run Through The Jungle

Mel Gibson has a thing — a big thing — about brutality. William Wallace’s climactic disembowling in Braveheart, the dozens upon dozens of terrible blows inflicted upon Jim Caviezel‘s Jesus in The Passion of the Christ, and now, in the obviously well made and extremely visceral Apocaylpto, all kinds of gougings, clubbings, belly-guttings, stabbings, disembowelings, animal attacks, ritualistic beheadings and tapir testicle- chewing are served up start to finish. And it’s gotten to be a bit much. Really. 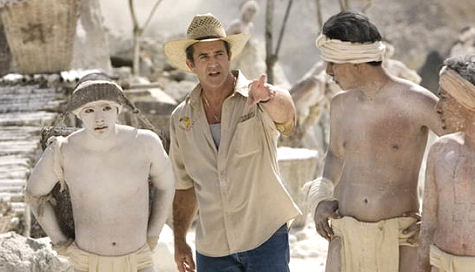 Apocalypto is basically about a small village of nice-guy natives in ancient Mexico getting attacked and rounded up by a tribe of sadistic Mayan thugs and turned into slaves, and many of them later being killed for sadistic sport. One guy named Jaguar Paw (Rudy Youngblood) manages to slip their grasp, which leads to a third act that’s all about his being hunted down and outwitting his pursuers. You know from the get-go that Youngblood — a good-looking guy with soulful eyes and a buff bod — is going to survive in the end, and that Mel’s idea is basically to put him through jungle hell.
Apocalypto closely resembles Cornel Wilde‘s The Naked Prey, which I saw years ago on the tube. Wilde’s film isn’t as graphic or atmospheric as Mel’s, but it’s fairly primal, taut and disciplined. The latter, trust me, is not a term that will readily come to mind after you see Apocalypto.
< ?php include ('/home/hollyw9/public_html/wired'); ?>
I’m not saying that the agonies depicted are excessive in the context of the story. I don’t know zip about the rituals of the ancient Mayans, and I’m not arguing with the theme of social decay or saying that present-day echoes aren’t valid. But there’s no doubt that this is first and foremost another trek through the psychology of Mel, and that there’s something very odd about that. People having been riffing about this for years, Something to do with Mel being a very hard-core, black-vs.-white, good-vs.-evil type of guy who sees some kind of link between acute physical torture and the cleansing of the spirit.
Hence, the violence in Gibsonland never really feels like it originates from any natural-feeling story or theme or exploration of character based on research or creative construction. It’s about Gibson taking a story and time and again imposing his psychology upon it — about his feeling a need to repeatedly burrow into a world of pain that is mainly about him and secondarily about everything else. That’s what artists do, obviously, but the relentlessness of the violence in his films is lacking in profundity. 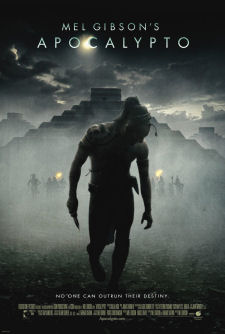 The more I watched Apocalypto the more this opinion sank in, and I just got sick of it after a while. It’s like Gibson and his co-screenwriter Farhad Safinia sat down and focused on creating a story that would heap on every ghastly form of torture, subjugation, mutilation and death known to or imagined by the most malignant Mayan psychopaths of all time. And because it’s mainly a mind-of-Mel film, I didn’t believe in the story or the characters or anything else. I just wanted it to be over. It enabled me, in fact, to see fresh virtues in the movies of Nancy Meyers.
Apocalypto is not schlock. It shows again that Gibson is nothing if not a totally go-for-broke, whole-hog, get-it-right filmmaker. He’s done an admirable job at recreating a rich, exotic, predatory world. The casting, costumes, set design, cinematography, cutting — all of it is of a very high order. But to what end?
About halfway through I started to see resemblances between Apocalypto and that old “kiki” joke. (Martin Mull told a version of it in The Aristocrats.) Two anthropo- logists are captured by a primitive tribe in some godforsaken no-man’s-land, and the chief goes up to the first guy and says, “You have a choice — death or kiki,” and the guy says, “Okay, kiki.” Hearing this, the excited tribesmen grab him and put him through one torture after another — roasting the guy alive, tearing his skin off, spearing him, gouging his eyes out, covering him with red ants and finally throwing him off a cliff into a pit of crocodiles. The chief goes to the second guy and says, “Death or kiki?” And the guy looks at his the remains of his pal and gulps and goes, “Uhm, yeah, well…I think I’ll take death.” And the chief, “Very well, death…but first, kiki!”

This analogy came to me somewhere between the third and the fourth severed head bouncing down the steep stone steps of a Mayan pyramid.
Variety‘s Todd McCarthy has written a rave of Apocalypto. I agree with much of what he says except for the part about “strong biz [being] possible” via “the blood-and-guts action crowd, Latinos, eco-political types and at least part of the massive The Passion of the Christ crowd.” Serious-minded film buffs will probably go. (I think they should.) But women are going to run the other way. Ditto the older sophisticated crowd. There is nothing here for Christians, and eco-political fans of Al Gore’s An Inconvenient Truth are going to take a pass also.
Gibson directed the hell out of this thing, and he deserves respect for that. But it’s a fairly unpleasant sit and is almost certainly doomed.