We all know the five-year anniversary of the 9/11 attacks is happening soon, and that Hollywood has gotten into this already with Paul Greengrass’s United 93 (which I still feel is the best theatre-released film of the year so far), and that Oliver Stone’s World Trade Center is about to pop on August 9th, and that the TV networks are planning on airing some 9/11 stuff in September.
And I can understand people saying, “Look, leave me out of this…we all went through it and it was awful but I’ve moved on…enough.” 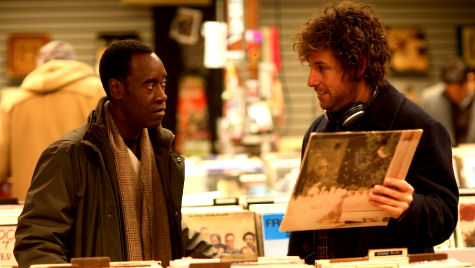 But what if there was a 9/11 movie that was only nominally about 9/11? A movie about dealing with 9/11 grief by not dealing with it, by keeping it in a box? Which, let’s face it, is where an awful lot of people are still at these days. (Like the ones who refused to see United 93 last spring, for instance) And which opens a door in a broader sense to a whole way of living, or not living as it were.
This is what Mike Binder’s Reign O’er Me, which I saw a couple of weeks ago, is more or less about. Set in Manhattan, it’s about a dentist and a widower in his 30s named Charlie (Adam Sandler) who lives in a state of total shutdown that requires never feeling grief over his dead wife and daughters — killed on 9/11 because they were on one of the jets that slammed into the towers. Because the hard drive has been erased and he’s living somewhere else.
< ?php include ('/home/hollyw9/public_html/wired'); ?>
The story’s about how Charlie slips into a renewed friendship with a dental-school pal named Allan (Don Cheadle), a well-to-do husband and father who relates to Sandler because he’s also living in a place of crust and solitude, and how this friendship brings some comfort to both. And then, very gradually, a bit more.
I’m bringing this up because I know Reign O’er Me is honest and real and excep- tional. And because I’m hearing that Sony Pictures execs are also high on it and have tested it with Average Joes and gotten some great test scores, and are thinking about opening it on December 1st and going for what they can get. 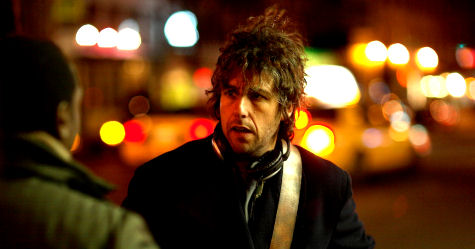 I’m also talking about Reign because I feel it touches the communal 9/11 current in a sadder and more intimate way than World Trade Center…no offense to Oliver or Michael Shamberg or Stacey Sher or Paramount, because they’ve made a good film also. But Reign has a metaphor that spreads out and sinks in. Which is that everybody (or almost everybody) buries the stuff that hurts.
I’m also mentioning Reign O’er Me because Sandler is damned convincing as Charlie, and despite his having never gone into serious acting territory, his work is good enough here to warrant entry into the year-end derby. I’m serious.
Sandler has never tried to do much more than his patented Sandler shtick (Punch Drunk Love and maybe The Wedding Singer excepted). But his Reign performance is a trip off the reservation. And it all crescendos in a breakdown scene at the end of Act Two that nails it and makes the performance whole. Say what you will about Click and Little Nicky, but Sandler’s Charlie is going to earn serious respect.
I’m also talking about Reign O’er Me because it’s Binder’s best film ever — it’s at least two or three notches better than The Upside of Anger, which I thought was a solid 8.5 with a couple of nicely full-bodied performances by Joan Allen and Kevin Costner.
And because Cheadle is superb in the film also — I found him much more affecting in this than in Hotel Rwanda. And because the rest of the cast — Jada Pinkett Smith, Saffron Burrows, Liv Tyler, Robert Klein, Melinda Dillon, John de Lancie, Donald Sutherland, and Binder himself — give rooted, lived-in performances all down the line. 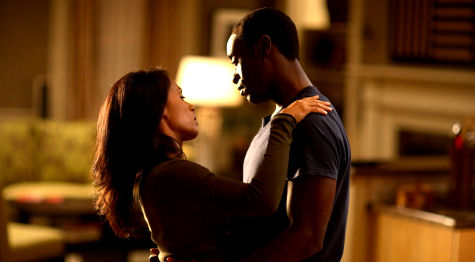 And because Russ T. Aslobrook’s widescreen photography, which was captured with a digital Genesis camera, is quite beautiful at times, the footage of nighttime Manhattan in particular.
And because the whole thing just works in a layer-by-layer way. Because it has a certain decency and quiet focus…a not-slow, not-hurried, building-into-something- true quality. And because it’s finally as much about Cheadle’s character and his marital issues as it is about Sandler’s emotional novacaine.
There are plans afoot to try to get it shown at certain festivals and hire the right publicity firm, etc. The usual moves for any quality-level drama with a December release date. Reign O’er Me (which is incorrectly called Empty City on the IMDB) may or may not get awards traction…who knows? Resistance among the Sandler haters may be so stiff that they won’t consider him for Best Actor…but I would be astounded if he doesn’t pick up support among the handicappers.
That’s about it. I just wanted to put this out there and let everyone know that some- thing pretty damn good has joined the fray…nothing more.