Men Must Always Be Watchful

Newish one-sheets for a pair of major year-end releases came through yesterday — the Australian-market poster for Baz Luhrman‘s Australia (which opens in Oz on Thursday, 11.13, according to the IMDB, preceding its Wednesday,11.26 U.S. release by 13 days) and a fresh image — less communal, emphasis on Daniel Craig’s studliness — for Ed Zwick‘s Defiance (Paramount Vantage , 12.12). The latter was exclusively previewed late yesterday afternoon by Kris Tapley‘s In Contention. 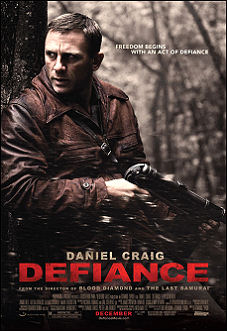 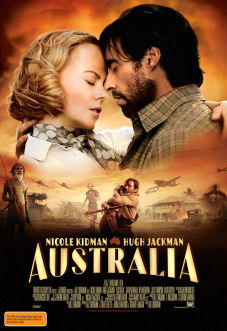 There’s something a bit unusual about the Australia poster, or the fact that the eyes of the embracing Nicole Kidman and Hugh Jackman are both shut tight. This indicates something besides just intimacy and bonding — it indicates relief (having recently experienced serious trauma, one gathers) and Kidman-Jackman communing with some inner aspect of themselves as much as with each other. It doesn’t just say “I love and need you” — it says “whew, thank God we got through that one!” and “let me just hold you and imagine that our troubles are no longer waiting around the corner and ready to pounce.”
They look scared or shaken up. Actually, the more I look at the poster the more Jackman looks like he’s sleeping.
It seems, in a word, vaguely unmanly for Jackman, who seems to be taking comfort in Kidman’s embrace the way a 3 year-old boy would take comfort in being held by his mother. Real Men Never Close Their Eyes — they keep their eyes at least half open in case predators are lurking about. As Marlon Brando‘s Don Corleone put it, “Women and children can be careless, but not men.”
Look at any number of passionate-lovers-embracing images from past films and posters, and you’ll find that most (or the vast majority) shows the male with eyes half-open or slitted. The only other love-embrace poster I can think of in which both partners’ eyes are closed is the Warren Beatty-Diane Keaton Moscow train platform poster for Reds. (Come to think, you can’t see Beatty’s eyes in that image, but the implication is there.)
I’m not saying embracers don’t close their eyes in real life — of course they do. All I know or feel is that Jackman looks wussy with his eyes closed. He seems to be going “mommy, mommy.” Or nodding out on something.
Here’s a larger image of the Defiance poster plus a larger Australia. And here’s a recent Defiance trailer.