Four months ago an HE tipster caught a research screening of George Clooney‘s Suburbicon at the Sherman Oaks Arclight, and passed along some comments. Now that there’s talk of this Fargo-esque ’50s noir comedy debuting in Venice six weeks hence, it can’t hurt to reconsider what was posted last March.

The tipster called Suburbicon Clooney’s “best-directed film ever…more bell-ringy than The Ides of March, Monuments Men, Good Night and Good Luck, Leatherheads and Confessions of a Dangerous Mind. The stars are Matt Damon, Julianne Moore, Oscar Isaac and young Noah Jupe. Paramount will open it on 10.27. 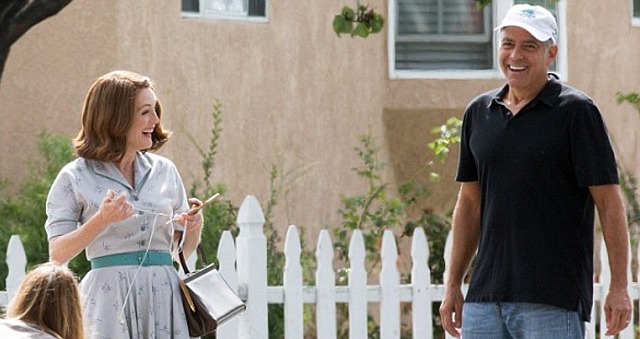 Before the Suburbicon showing, the guy had seen three unreleased films (the other three were Trey Edward Shults‘ It Comes At Night, Jason Reitman‘s Tully and Destin Daniel Cretton‘s The Glass Castle). He insisted that Suburbicon was the best of the lot.

“Despite being pillars of the Suburbicon Community, the Lodge family’s lives are turned upside down when a home invasion gone wrong is responsible for the shocking death of little Nicky Lodge’s mother. An unlikely and highly suspicious series of events consumes the Lodge household as the family descends deeper into a web of betrayal, adultery and blackmail.

“Following his mother’s death, young Nicky attempts to make sense of the strange and selfish machinations of the adults that surround him. This curiosity threatens his father’s attempts at a new family order. All the while, the chaos unraveling inside the Lodge family home goes unnoticed as the town works itself into a riotous mob in response to the first black family moving into the home right next door…”