As a would-be Oscar contender, Stranger Than Fiction (Columbia, 11.10) is dead. This fact was made resoundingly clear after today’s (9.8) press screening at the Toronto Film Festival. You and your friends can still pay to see it when it opens two months from now and chuckle and eat popcorn and discuss it afterwards… knock yourselves out. But forget the derby. 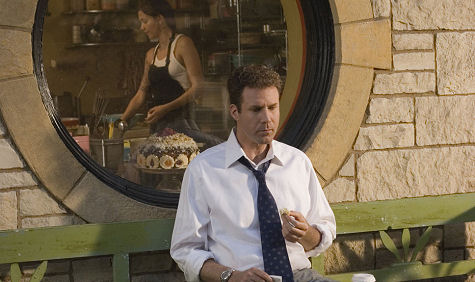 Maggie Gyllenhaal, Will Ferrell in in Marc Forster’s Stranger Than Fiction

The only reason anyone had reason to presume Fiction might be award-quality is that it’s a big-studio November release with quality-level people behind it (director Marc Forster, producer Lindsay Doran, screenwriter Zack Helm, costars Will Ferrell, Emma Thompson, Maggie Gyllenhaal, Dustin Hoffman, Queen Latifah), and a pseudo-trippy storyline in the vein of Charlie Kaufman‘s Adap- tation and Eternal Sunshine of the Spotless Mind .
But it’s a half-assed little failure — a middle-range mindfuck movie that isn’t that clever or funny or up to something that holds metaphorical water. That’s because the “imaginative” metaphysical scheme behind it doesn’t really add up or pan out. I almost hated it. In some ways I do hate it.
< ?php include ('/home/hollyw9/public_html/wired'); ?>
I can’t explain what’s wrong with Stranger Than Fiction without discussing plot particulars so if you’re averse to spoilers, read no further.
It’s about a lonely, overly regulated IRS agent named Harold Crick…stop right there. Right away you can smell the whimsical tone. Giving a joyless, constipated character the last name of “Crick” is like calling a cowboy character “Dusty Rhodes” or a backwoods yokel “Clem Kadiddlehopper.” Having him portrayed by Ferrell is…well, not a bad idea. In theory. Ferrell is more restrained and character- contained here than in any film he’s ever been in, and I remember saying to myself early on, “Good for him, he’s subliminating his schtick.”
But fifteen minutes with Harold Crick was enough to make me nostalgic for Talladega Nights, and that’s bad. All Ferrell has to play here is confusion and timidity and befuddlement, and anhour’s exposure to these states of mind make you feel down and dreary. 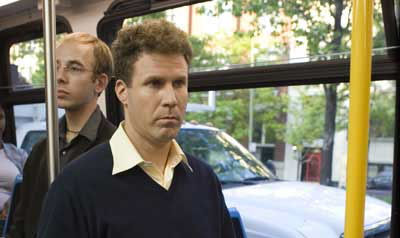 Harold’s problem is that he’s begun to hear his life being narrated by a woman with a British accent. Literally, like a DVD narration track. And it’s driving him nuts. We gradually learn that the voice belongs to a chain-smoking writer named Kay Eiffel (Emma Thompson), who is having lots of trouble finishing her latest book, which is largely about an IRS agent named Harold Crick. Yup…same.
Anyway, Kay is planning to kill Harold off and doesn’t quite know how. (She’s murdered several of her characters, we’re told.) And Harold, once he gets wind of this, seeks her out and pleads with her not to kill him because for the first time in his life he’s starting to feel love and joy, having fallen for a cookie lady (Gyllenhaal) whose tax returns he’s auditing, and because he’s just begun to learn to play guitar.
An interesting idea…at first. Anyone who’s written fiction knows that sometimes the characters tell you what they want to do. You may have had a plan for this or that to happen to them, but every so often characters talk back and say, “Hold up, man…this is my life, okay? And this is what I want to do.”
Except — and this is the Big Problem — the movie never makes it clear that Harold Crick is or isn’t living inside Kay Eiffel’s head. It never makes a case for the fact that he’s existing in some imaginary realm Kay is creating as she moves along with her book, or, assuming he’s real, how and why Kay’s imaginings have any power over him. 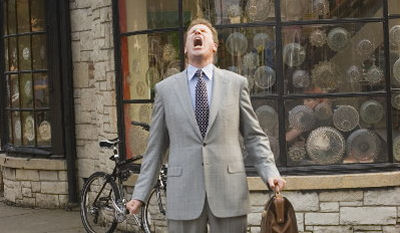 The bottom line (I think ) is that Harold is as real as you or me or Piers Handling or Paris Hilton…or so it seemed to me. And yet Harold believes he’s a character in Kay’s book and he’s afraid that Kay will have him killed, etc. On top of which Kay is unaware that Harold is a real-life physical creature who is being guided and provoked by her words.
Desperate, Harold turns to help from a quirky English professor, Dr. Jules Hilbert (Dustin Hoffman), who listens with interest but also a kind of strange indifference to his tale. Very strange. Hilbert tells Howard at one point that if Kay has decided he has to die, he may as well accept it because the manner and circumstance of his death that she’s dreamt up will somehow be more enobling than an average death. Or some such hooey.
On top of which there’s Queen Latifah as some kind of soother-smooth talker type who’s been ordered by Eiffel’s publisher to help her circumnavigate the writer’s block. Can anyone imagine an ordeal more terrible than having to deal with Queen Latifah more or less moving into your home or workspace and sitting on you (all 250 pounds of her) until you start writing again?
I know this sounds like a tiresome, half-baked, full-of-holes story idea, and it may feel tedious just reading about it in this space, but seeing the film is much, much worse….trust me. Stranger Than Fiction is one of those movies that makes you shift around in your seat and squeeze the armrest of your chair and whimper and grit your teeth. After an hour or so it makes you feel like your head is going to explode. 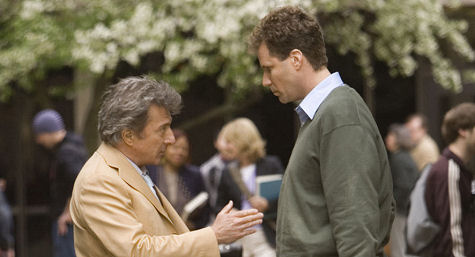 Zac Helm’s script was widely admired before this film was made, and I still can’t figure why that was. I tried to read it twice and couldn’t get through it. The damn thing doesn’t echo because the system of the story hasn’t been thought out or explained in a way that really “works”. It’s stuck on its own deadpan cuteness and quirkiness and other-ness. Talk about flames licking your feet.
I’m not saying Fiction won’t have its fans here and there, but it’s finished as far as any kind of derby points are concerned because there will be enough detractors like myself throwing its value into question. Average Joes, trust me, are going to go “later” and shine it after the first showings on Friday night.