N.Y. Times reporter Brooks Barnes and script doctor Jordan Roberts came up with a fairly ridiculous pitch for a Washington, D.C.-based Hollywood blockbuster — deliberately bad, but only a step or two beyond the $150 million films that are getting made these days — and showed it to producer Lynda Obst and other Hollywood sharpies. To call their responses deeply depressing isn’t the half of it. Q: What do you call 500 production execs who subscribe to this insane megacorporate mentality about gambling big on elephantine, CG-driven bullshit movies…what do you call these guys at the bottom of the Philippine trench? A: A good start. 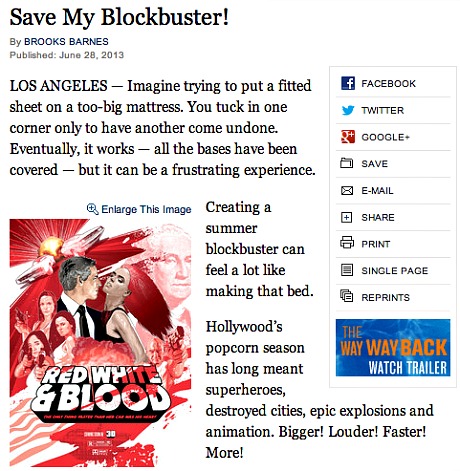 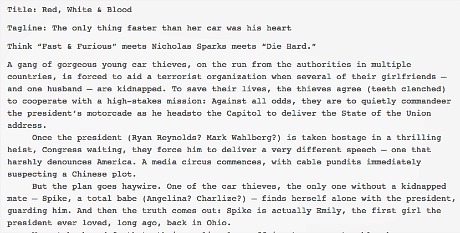 “Because [big fat-ass blockbusters] need to attract the biggest global audience possible, they are increasingly manufactured by committees who tug this way and pull that way,” Barnes writes. “Marketing needs this, international distribution needs that. The all-too-common result is a Frankenfilm, a lumbering behemoth composed of misfit parts.

“When they work, there is a box office bonanza. Studios this year have rejoiced over The Hangover Part III, World War Z and Iron Man 3. When they don’t — well, it’s After Earth or John Carter. (The next big-budget movies to face judgment are The Lone Ranger with Johnny Depp and Pacific Rim, a robots-versus-monsters movie from Guillermo del Toro.)”