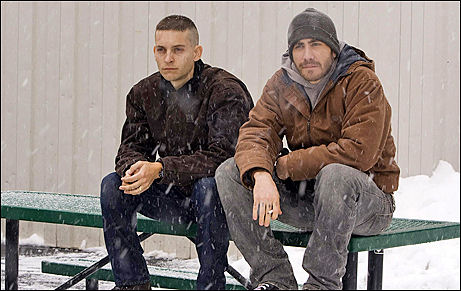 Hammond asked “why no bloggers are buzzing about Brothers even with its Dec. 4 opening less than a month away”? Well, I’ve been writing about this film for over two years now, beginning with a start-of-filming announcement and into a 10.1.08 report that MGM had bumped Brothers out of a once-planned 12.4.08 release.

But to answer Hammond, no one’s blogging about Brothers because Lionsgate has been lagging on press screenings invites, or at least none as far as this inbox is concerned. I’m told there’s some kind of “special screening” in Manhattan slated for 11.22, and an L.A. premiere screening set for 12.1. Sheridan is currently in Toronto preparing to shoot Dream House, a psychological thriller with Daniel Craig starring. He flies to Ireland tomorrow and returns to this side of the pond a week or so later.

Sheridan’s remake follows Bier’s basic story. Maguire and Gyllenhaal are the brothers separated by character and philosophy (as well as four inches of height). Maguire is the older, “responsible,” married brother who goes off to Afghanistan and gets into a situation that results in a MIA report sent home. Portman plays Maguire’s wife. Gyllenhaal is the younger fuck-up brother who begins to fill his brother’s familial duties when Maguire disappears during a skirmish and is presumed dead.

Lionsgate is obviously much more interested in promoting Precious than Brothers at this stage, and who can blame them? But conspicuously not screening a film that will be released nearly three weeks hence seems like a weird way to play it. Being a huge fan of Bier’s original work, I refuse to believe that a film with this story and a cast of this calibre wouldn’t deliver in a significant and applaudable way.

“This powerful and timely story of a decorated Marine, presumed dead in Afghanistan, who comes home to great conflict within his family and within his own head, is a poignant and explosive look at the toll that combat exacts from veterans’ lives,” Hammond writes. “It feels especially pertinent now in the wake of the Ft. Hood tragedy and shows that war doesn’t really end for some vets once they return.

“Sheridan received a tremendous ovation Sunday afternoon when he was introduced for a q & a after a very well-received Directors Guild of America screening. The free-wheeling director engaged in a refreshingly honest and thoughtful conversation about the film’s bumpy journey to being remade.

“Sheridan pointed out that he doesn’t normally like the idea of remakes, but this one seemed irresistible, if full of minefields. In the end he believes it is quite faithful to the spirit of the Danish original and said Relativity Media, which financed the film, even did research screenings on Bier’s movie to get a take from an American audience for help in shaping the redo.

“[Sheridan] also mentioned there were some reshoots as he tried to get a grip on what the movie should be.

“The film was finished by November 2008 but Relativity agreed to hold it for a year to get just the right release date. Sheridan says selling any film with a war theme is tricky and fall is a better time for this particular subject matter. With Summit’s widely acclaimed Iraq war flick, The Hurt Locker opening last summer, it was probably a wise move.” 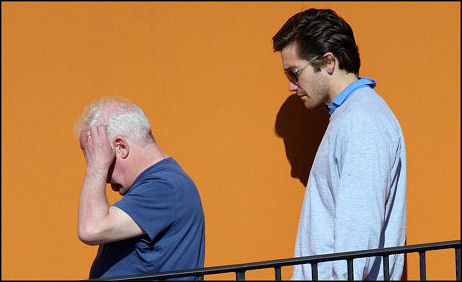