4 Months, 3 Weeks & 2 Days, the one foreign- language film of ’07 that could arguably be called a masterpiece, was seen by one of the four color-coded Oscar screening committees on 11.2, and the reaction, according to three people in the loop, was “definitely mixed,” as one journalist friend puts it. 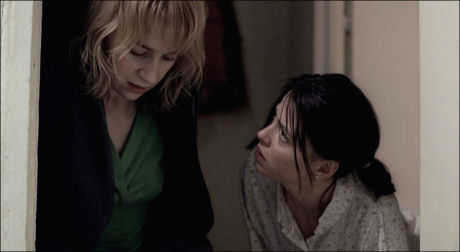 The result of this reaction, the journo says, is that “it may not even make the short list.” He means the 12 or 15 foreign language films that will be re-screened and re-evaluated in early January ’08 with producer and senior committee guy Mark Johnson providing guidance and leadership as they decide on the final five nominees.

“Some felt it was a masterpiece and others didn’t,” according to a publicist. The journalist says he heard that some complained that Cristian Mungiu‘s film is “too slow” and that some “didn’t like the fetus on the floor shot.” The publicist says that “some complained about Oleg Mutu‘s static camera work” as well as “some of the hand-held tracking shots.”

Jesus wept! In the early ’60s the same kind of people were complaining about the “shaky” or “amateurish” photography in some of the French New Wave films. I remember an uncle complaining about A Hard Day’s Night when it first came out, saying it looked like “home movies.”

With all appropriate respect, the Academy’s foreign-language film committee needs to be gently reminded that the Movie Gods have their own laws, standards and decrees, and that Oscar committee members aren’t permitted to dismiss recognized masterpieces and Palme d’Or winners for reasons that are based on banal judgments stemming from limited vision or a lack of sophistication.

This gentle reminder doesn’t apply to all members of the Academy’s foreign film committee — just the lazy, not very hip ones. As one handicapper comments, “There are two branches within this group — the ones who see a foreign film and go ‘Aaahhh, I didn’t like that’ and ‘that part bothered me’ and so on, and the other ones who know a good or great film when they see it.”