For me, the two Mesrine movies feel like the most intriguing adrenaline rides of the late summer. A total of 245 minutes (112 + 133) = a French Scarface by way of Carlos minus the politics with more sex and shouting. The usual self-destructive violent arc, life as a roman candle, this way madness lies, ’70s sideburns, etc. The name is pronounced “Mayreen.”

The problem for Music Box Films, of course, is that however you want to pronounce it, “Mesrine” means nothing to Joe Popcorn.

The wiser way to go for the U.S. market would have been to forego the name altogether and called the films Frog Blaster 1 and Frog Blaster 2. It’s genius if I do say so myself — the kind of name that Hip-Hop Homeys (i.e., the natural fans of this sort of film, having embraced Al Pacino‘s Tony Montana as their patron saint) would relate to. On top of which Frog Blaster sounds like a video game.

No one can do blood-vessel-popping madness like Vincent Cassel.

You know how two-part crime movies go. They’re all The Rise and Fall of Legs Diamond. The first part is about the upswing — fighting through and creating the legend; the second is about the action intensifying, various gathering complications and the inevitable death or downfall.

The director is Jean-Francois Richet; the screenwriter is Abdel Raouf Dafri. The Mesrine films are two years old (of course, naturally), having played in France in ’08 and in England the following year.

Jacques Mesrine (1936-1979) was a French John Dillinger who had a couple of straight jobs for brief periods, wore outrageous mutton-chop sideburns in the ’70s, and was finally cut down in a hailstorm of bullets in a cop ambush. 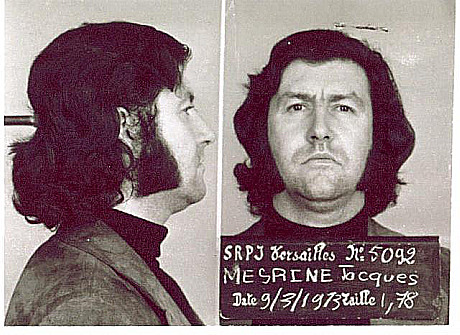 I love the following portion from Mesrine’s Wikipedia bio: “Mesrine escaped again on the 21st August 1972 with five others from Canada’s famous Saint-Vincent-de-Paul prison. With accomplice Jean-Paul Mercier, a wanted French-Canadian murderer, Mesrine robbed a series of banks in Montreal, sometimes two in the same day.

“On 3 September, they failed in an attempt to help three others escape from the same prison (Saint-Vincent-de-Paul) but remained at large. A week later they murdered two forest rangers. They continued robbing banks in Montreal, and even sneaked into the USA again for a brief stay at the Waldorf Astoria in New York. By the end of the year they moved to Caracas, Venezuela with two mistresses in tow.”

Two mistresses in Caracas? Stopovers at the Waldorf Astoria? Mesrine’s life was a Warren Zevon song.