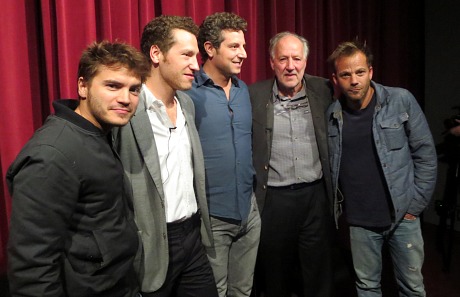 A rep asked me for my reactions and I decided to be frank: “Very good acting (especially from Dorff, Hirsch and Kristofferson) and commendable filmmaking chops, but the story and general subject matter are glum and depressing. These characters are hopeless — emotionally damaged, ailing, not that bright, prisoners of alcohol abuse to some degree. There’s really nothing to go with in a film if there’s no light of any kind at the end of the tunnel — if there’s no goal or dream or hope of any kind. It was obvious within five or ten minutes that these guys have nothing figured out and that Dorff, especially, is going to go down sooner or later.

“I’ve been in that motel room. My younger brother and I shared one when I was in my 20s, living on the scruff with barely any money. I’ll tell you about the value of having a brother who cares about you (and you about him as far as it goes). That value is not that much. Having a trusted brother to care about and talk to at night when the lights are out might sound like a comfort, but it doesn’t make a dent. People take their siblings for granted anyway. Nobody is in deeply in love with their brothers or sisters. You’re not going to get me with any of that “loser brothers talking to each other and helping each other out between sips of whiskey” stuff. Fuck that.

“What matters in life is grimming up and working hard and finding out what you can do that works on a long-haul basis. Life is hard and it doesn’t suffer fools. These guys haven’t even thought about how to get on top of things, much less tried and failed. In another life they could be gifted artists and writers, perhaps, but here they’re almost complete losers, and so, to be bluntly honest, was my younger brother, who died from an accidental Oxycontin overdose in October 2009. So I know exactly what that motel room vibe between brothers amounts to, which is shit.

“The Motel Life has a heart, but it’s not Of Mice and Men (which it kind of resembles) and it sure as shit isn’t Midnight Cowboy. But Dorff gives his best performance ever, possibly. Better than he was in Somewhere. It’s really quite affecting. He really is Lenny.”