Fifteen seconds after my London flight arrived at JFK this afternoon I learned of Patrick Goldstein‘s bullwhip piece accusing me of showing no balls during my interview with Fantastic Mr. Fox director Wes Anderson . 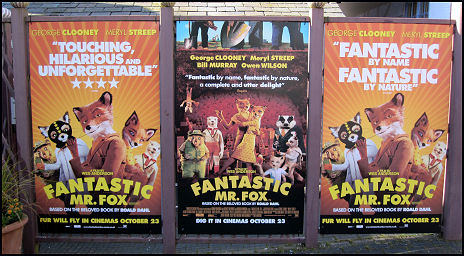 The Big Wimp-Out happened, in Goldstein’s view, when I questioned Anderson about that 10.11 Chris Lee L.A. Times piece that repeated gripes from Fantastic Mr. Fox dp Tristan Oliver and director of animation Mark Gustafson that Anderson (a) made their lives miserable by being an overly-demanding nitpicker (or something like that) and (b) not being on-set and directing the film by e-mail from Paris.

Goldstein felt that I candy-assed out, wasn’t Mike Wallace-y enough and appeared to be in the tank for Anderson when I said the following: “Now if I were being hired by Wes Anderson to work with him, I would have a very clear idea, before we had even talked about the particulars, that I was going to be working with a guy with a very specific, personality-related, stylistically-related thing, right? So I’m trying to get from you how can — what is the best way to expand upon and understand the, uhm, slight griping in that Chris Lee piece…because I don’t understand how anybody could say, well, when you’re going to do a film somebody’s way, you’re obviously going to be adhering to a very particular thing and that’s all there is to it.”

Goldstein supposed that I’d been bent over, bought off and Crisco-disco’ed by the fact that 20th Century Fox had flown me into London and put me up at the Dorchester, which led me to conduct interviews in an obsequious fashion. Well, let me explain as plainly as I can.

I was in the tank for Anderson going in because I don’t like whiners. If you sign up to work with a director (and especially a particular-minded auteur-level director), you don’t whine about the collaboration not being mellow or groovy enough, as Oliver and Gustafson apparently did. You man up and suck it in and ride it out. Making movies is not about feeling personally happy — it’s about artistic servitude and making the best damn movie you can so you can be proud of it when you’re 90 years old.

I have always supported demanding directors whenever people have complained about them being tough to work with. You could easily find (or certainly imagine) similar complaints about demanding, world-class directors like Jim Cameron, David O. Rusell, Brian DePalma, Oliver Stone, Stanley Kubrick, etc. By the same token Tom Cruise could have theoretically said about the making of Eyes Wide Shut, “Gee, I thought we were going to make a movie for two or three months and it wound up taking a year, for God’s sake, and I felt overworked and unhappy!” Talent talks and bullshit walks.

Anderson is nothing if not precise and meticulous, which is why his films (duhhh) have that uniform Wessy-ness…that absolute stamp of personality. So how in the world could Oliver and Gustafson have agreed to work on Fantastic Mr. Fox without understanding that (a) at the end of the day, making it would not be a collaborative effort as much as a “yes, boss…sure thing, boss…how high d’ya want me to jump?” type of thing, (b) that Anderson, having no experience with stop-motion or animation, would simultaneously be on a learning-curve and, being himself, also not looking to do things the usual way, and, more fundamentally, that (c) crafting and imposing an auteurist stamp would somehow be an easy-going, comme ci comme ca endeavor?

On top of which two or three Anderson/Fox collaborators said during junket interviews that Anderson hanging around the set during the months and months of stop-motion photography on Fantastic Mr. Fox would have been counter-productive.

But if some want to think of me as a pants-around-the-ankles type as a result of this fracas, fine. I’ve been a little too much the maverick, contrarian and anti-authoritarian for much of my life. This Fantastic Mr. Fox thing has established a new side to my personality — i.e., junket slut. I’ve earned enough credits on the other side of the ledger to be thought of in this way without incurring any damage.

Oh, and by the way: guess who’s scheduled to be the moderator for the Envelope/LA Times screening series showing of Fantastic Mr. Fox and the q & a with Wes Anderson on November 3rd? None other than Patrick Goldstein.