I’ve watched two South by Southwest movies on disc today (on top of banging out that piece called “Things Change“). I’ll let the first one go but Joe Swanberg‘s Alexander The Last, which will show simultaneously at SXSW and on IFC Demand on Saturday, 3.14, is the shit. Seriously. I knew something a cut above was underway within two or three minutes. 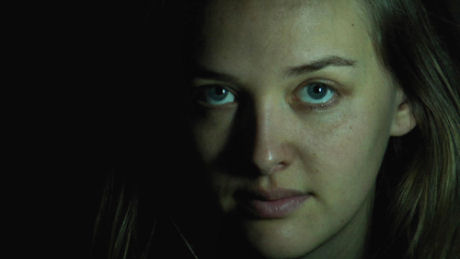 Talk about your platinum calling-card movie for Swanberg and his two lead actresses, Jess Weixler (who won a 2007 Sundance Special Jury prize for her performance in Teeth) and Amy Seimetz.

The two guys they’re sort of paired off with, Justin Rice and Barlow Jacobs, are, for me, almost staggeringly nothing (I kept asking myself “why were these vessels of boredom even cast?” until I just gave up and put them out of my mind) but Josh Hamilton and Jane Adams add distinction with their small but intriguing supporting roles. But the movie itself is the thing. There’s a current going on that’s hard to describe. Something in the way it plays and breathes and almost looks the viewer in the eye. I couldn’t tear myself away.

It’s one of those rare mumblecore pieces in which you’re suddenly struck with a reality vibe that tells you right off the top that something else is happening. I was so into the feel and touch and naturalness of this film that I didn’t really care where Swanberg’s story, such as it is, was headed. I knew that something would manifest sooner or later, but mumblecore never really builds or develops or plants seeds in a North by Northwest-ian or Third Man-ish way so who cares in the first place? Either you find the actors intriguing and possessed of something more than manner, or you don’t.

Alexander the Last is more or less about a young blonde actress (Weixler, who looks a bit like Alicia Silverstone but is six or seven times more talented), and her nice, dorky, funny-looking musician husband (Rice) and a meant-to-be-hunky guy she’s performing with in a play (Jacobs, who has one of the worst haircuts I’ve ever seen on any actor in any movie in my entire life) and the emergence /appearance of infidelity. Seimetz plays Weixler’s sister, and it’s obvious from the first scene of (a pretend wedding ceremony) that they’re Bergman/Persona close. I thought there was a lesbian thing going on before I realized they were related. 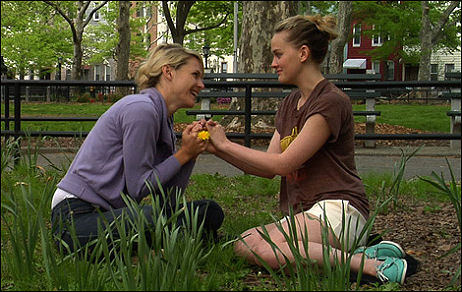 But it’s not what happens in a storytelling sense as much as how it feels when this and that behavior manifests. We’re basically talking about a little movie made with a lot more skill and emotional realism and acting that sinks in much deeper than usual. It’s kind of a mumblecore-meets-dogma deal, which I’m tossing out as an eternal lifelong admirer of dogma movies and who never accepted or listened, even, to those who began trashing this movement starting about six or seven years ago.

I knew something good might happen when I saw that director-writer Noah Baumbach (Greenberg, Margot at the Wedding, The Squid and the Whale) is one of the producers along with Anish Savjani, who produced Wendy and Lucy, Nights and Weekends, Me, Myself, & I and Hannah Takes the Stairs.

Weixler is a well-respected, gainfully employed indie star waiting to happen in the bigtime. She needs to be cast in something alongside Jake Gyllenhaal or Brad Pitt or Sean Penn or somebody in that realm. She’s got it, that’s for sure. Seimetz is every bit her equal (and with fantastic gams, by the way), but I paid more attention to Weixler after that first kick-ass wedding vow scene. No offense.

And Swanberg is as good as it gets at this sort of thing, i.e., movies in which nothing happens except random attractions and couplings that aren’t quite right or holy and need to be kept under wraps. I just thought of something. You know who was also quite expert at making films about interesting, attractive people with wandering libidos in which nothing really happens? Michelangelo Antonioni. Swanberg isn’t close to his level, but the last time I was this absorbed by a film of this general type with almost no “story” was L’Eclisse. Which I’ll bet Swanberg has never seen.

I have no idea why this film is called Alexander The Last. I guess I’ll have to watch it again and listen more closely.