My Aim Is True

I was a little unsure at first about seeing Dagur Kari‘s The Good Heart (Magnolia, 4.30). I’m not a big fan of scruffy, armpit-scratching indie dramas about unlikely but nourishing relationships between oddballs, or in this particular case between a kind-hearted lost youth (Paul Dano) and an older, snarly, curmudgeonly barkeep (Brian Cox). I read the synopsis prior to Heart‘s Toronto Film Festival debut and went “later.” 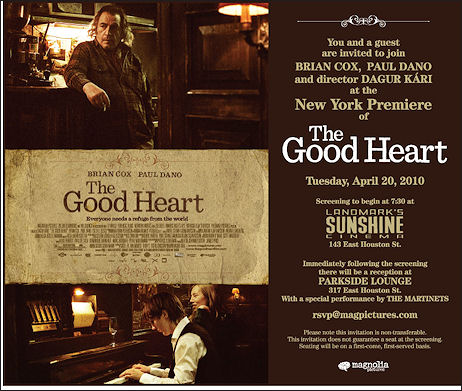 But I went to last night’s premiere at the Sunshine Cinemas, persuaded in part by the respected reputation of the Iceland-born Kari (Noi The Albino, Dark Horse), and the re-teaming of the excellent Cox and Dano, who first worked together on Michael Cuesta‘s L.I.E. (which opened in New York on 9.7.01).

And sure enough, Cox and Dano are quite good. How could two of the finest character actors around right now disappoint? Fascinating fellows to the last. I was also taken with French actress Isild Le Besco, who plays a homeless person looking for shelter and whatever else. (Kari told me last night she’s directing her next French-language film sometime soon.)

Cox’s Jacques character struck me as a bit too angry and blustery, however. I just didn’t like him or want his company after a certain point. “Will you please chlll down?” I muttered at one point. “I mean, would it kill you to ease up and not be a cantakerous asshole every waking minute?” Life is short but time spent with a guy like Jacques in a movie can feel like an eternity. On top of which I don’t care for fellows who smoke and stink up the joint, and who cut farts while eating broccoli.

But I was held by Kari’s directorial discipline. Time and again The Good Heart cuts right to the story chase — it doesn’t dawdle or meander. Usually when strangers (i.e., the kind fated to be friends) meet in a small film, they paw at each other, spar, argue, dislike each other intially, bicker, betray each other…and then after 15 or 20 minutes they relax and find some way of being friends or at least partners. Kari doesn’t fool with that. Cox and Dano meet in a hospital room, and in the next scene they’re chatting and getting down to business. No muss or fuss.

The film runs 95 minutes. It costars a white duck who lives in a cage in the bar owned by Cox/Jacques. It has one of those muddy-bleachy color schemes — grayish blues, murky browns, blacks, whites, grayish skin tones.