Nobody gives a damn about a 73 year-old Tony Award-winning play called Mr. Roberts. Well, a few boomers do, I suppose, but everyone hates boomers (polluted the planet, took all the money, condemned Millennials to a lifetime of economic anxiety) so fuck them and the play together. Whatever merits the play (co-written by Thomas Heggen and Joshua Logan) may have radiated during the Truman administration, they’ve long since seemed to matter.

But speaking as someone who long ago watched a degraded pan-and-scan version** of the 1955 Warner Bros. CinemaScope adaptation with Henry Fonda, James Cagney, William Powell and Jack Lemmon in the lead roles, I’ve always been mystified why anyone in the mid ’50s ever thought Mr. Roberts, regarded as some kind of ace-level heart comedy in its heyday, thought it was any good.

A WWII Naval chuckler set aboard a backwater cargo ship called “the bucket” (and based upon some short stories written by Heggen about his war experiences), it’s basically a serving of coarse service humor, sentimentality and painfully sodden slapstick.

And yet the stage version of Mr. Roberts, directed by Logan, won a Tony Award for Best Play. I’ve never read the Heggen-Logan original, but the film must have coarsened the material considerably. It just stands to reason. Broadway sophistos have rarely celebrated the above-described behaviors in any form. 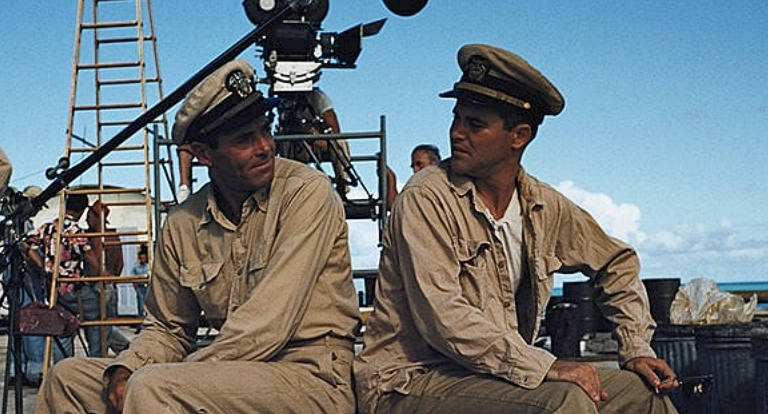 The central idea of the film version is that the enlisted men are eight-year-old children who love their kindly father (Fonda’s Mr. Roberts, a Lieutenant JG) and despise the petty, neurotic and tyrannical Captain Morton (Cagney). Over and over the film conveys what a rollicking pleasure it is to taunt or belittle Morton or better yet make him so furious that he throws up.

Oh, and what a hoot it was to watch nurses undress through binoculars from a distance of several hundred yards. And to make your own liquor with various rotgut ingredients…hilarious!

With the exception of one amusing scene in which the under-educated Morton rants about how much he hates snooty college boys like Roberts and how they treated him when he worked as a bus boy in the 1920s (“Oh, bus boy! It seems my friend here has thrown up all over the table…fetch a mop and clean up the mess, bus boy, will ya?”), there’s nothing the least bit funny in the entire film. You can see what was intended to be funny but none of it lands.

The lead performances are fine in and of themselves (Lemmon won a Best Supporting Actor Oscar), but the crew is just awful. The simpleton behavior and mentally-stunted emotions…God.

The principal reason for the failure of Mr. Roberts was John Ford, the genius-level, Oscar-winning director who was also a lifelong alcoholic and a surly old cuss who always brought the material down to his own unpretentious and irreverent level, especially when it came to films about men in uniform. Ford worshipped the idea of getting loaded and being insubordinate and snarly and generally sour-facing everyone.

Alleged Cagney quote: “I would have kicked his brains out. He was so goddamned mean to everybody. He was truly a nasty old man.” 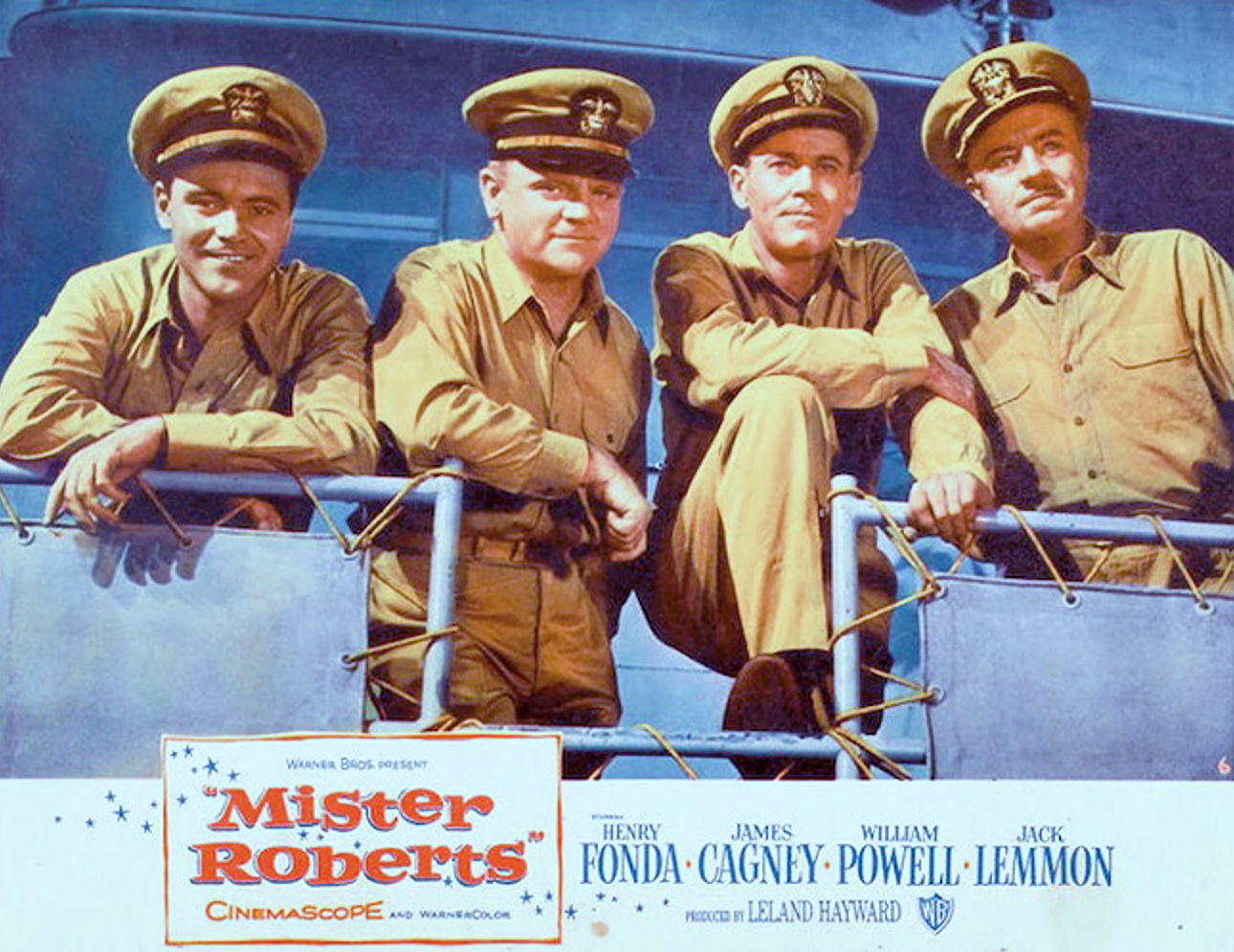 Fonda had played the title character on Broadway for roughly two years, and knew him inside and out. He was also, understandably, attached to the more upscale version of the play. Unfortunately Ford had hired Frank Nugent to rewrite the play for the screen and make it more Ford-ian, which is to say more lunkheady and aimed at the hung-over, common-man primitives in the balcony.

Once filming began on Midway Island, Ford and Fonda began bickering. Producer Leland Hayward called a meeting to clear the air, but the half-in-the bag Ford (one account says he was sprawled on a lounge chair and sipping from a tall drink) stood up and sucker-punched Fonda. Fonda walked out. Ford attempted an apology 15 minutes later but it didn’t take.

Some say Ford’s drinking led to his being dismissed from the film. Ford had to have a sudden gall bladder operation, and this was used as the official explanation for his departure. Mervyn LeRoy and later Joshua Logan took over directing duties and finished the film. Ford and LeRoy are credited as co-directors in the opening credits.

Ford biographer Joseph McBride: “I think it’s a weak movie, a botch. Fonda told me he hated it. The material has strength, and Lemmon is fine, and Fonda is good enough (Cagney is merely a buffoonish cartoon, not worthy of his talents), but it is so clumsy and uneven in mixing bathos and slapstick that I wonder why some people like it so much.

“After Ford’s brawl with Fonda, Ford started getting drunk while directing parts of it, and Ward Bond (!) had to take over for a while to keep the cameras running. Then the execrable Mervyn LeRoy and the even worse Joshua Logan directed parts of it after Ford had to bow out.” 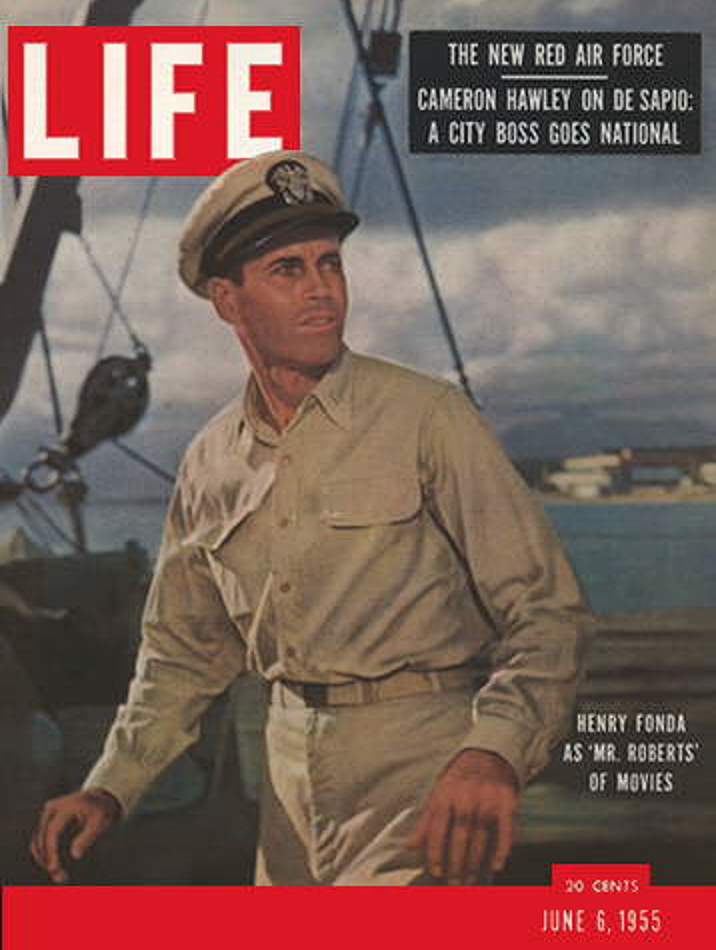 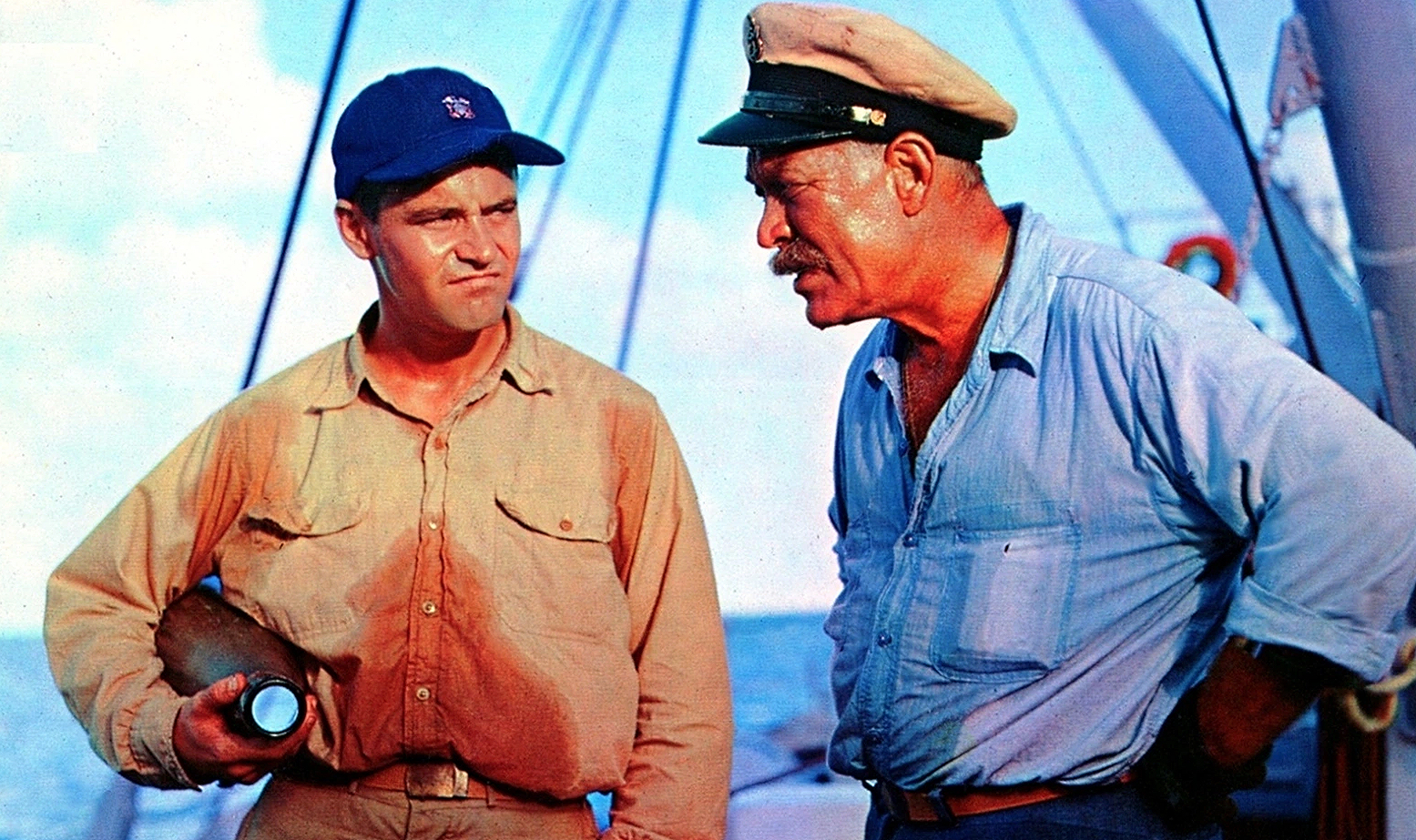