Getting drowned, mauled and chomped to death by a killer whale is a horrible way to go, so my sympathies to the friends and family of the late Dawn Brancheau, 40, who suffered this grisly fate two days ago at a SeaWorld in Orlando, Florida. 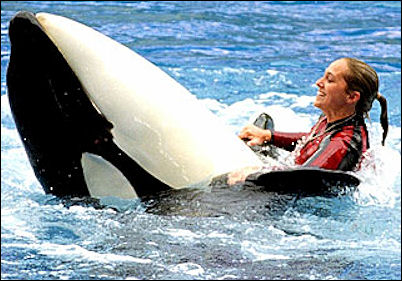 But — yup, here comes the thing that you’re not supposed to say — the instant I read this I said to myself, “This is a captive animal getting some payback…an inmate letting a prison guard have it across the chops on behalf of tens of thousands of killer whales and dolphins who’ve been forced to perform at sea parks.”

The Cove explained this situation very clearly. Making sea mammals perform tricks for suburban-schmuck families is not only an agonizing life-sentence jail term but a form of emotional torture. In the film Ric O’Barry tells of a dolphin who was so depressed by a SeaWorld-type confinement that it committed suicide.

SeaWorld employees seem to be getting this on some level. A SeaWorld spokesperson has said “it will resume its killer whale shows on Saturday” but that trainers won’t enter the water. “I wouldn’t begin to speculate what he was thinking,” the spokesperson said in response to a reporter’s question about the whale’s state of mind when he lunged at Brancheau. “It’s too premature to guess what happened.”

The guy added that an investigation into what happened to Brancheau is presently underway. That’s it — bring in Detective Colombo.

Brancheau “was standing knee-deep in one of the Orlando park’s pools Wednesday when killer whale Tilikum leaped out of the tank, grabbed hold of her ponytail and dragged her underwater. Her cause of death was likely drowning and multiple traumatic injuries. The tragedy occurred at 2 p.m. during a post-show event at Shamu Stadium as about two dozen horrified visitors watched. Witnesses reported seeing the 12,000-lbs. whale thrashing Brancheau around in the water and carrying her in his mouth.”