Why is a forthcoming DVD of Michelangelo Antonioni‘s Il Grido (’58) only available in England? Why isn’t it coming out here through Criterion? This is Antonioni’s first landmark film — his first world-class depiction of characters trapped and semi-narcotized by a sense of their alienation and rootlessness. 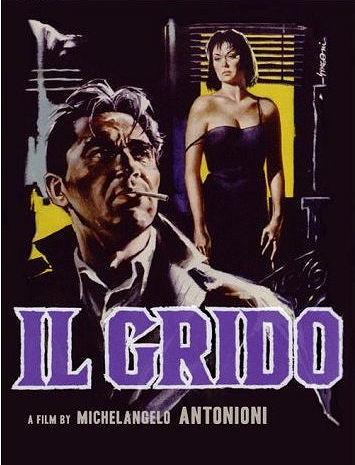 “When sugar refinery worker Aldo (Steve Cochran) is jilted by his mistress, Irma (Alida Valli), he takes to the road. With daughter in tow, Aldo wanders the Po River delta, seeking temporary but always illusory respite with a series of lovers, who only serve to remind him of Irma. Unable to find a new life, Aldo’s haunted past gives way to a fateful finale.

“With a script conceived by Antonioni, exquisite cinematography (including a signature concern with desolate vistas), and a plaintive score by renowned composer Giovanni Fusco, the award-winning Il Grido — it took the Golden Leopard at Locarno — is an early key work in the director’s much-celebrated oeuvre.