Needs To Be Seen

I’ve now watched the extended cut (138 minutes) of Ridley Scott‘s The Counselor twice — via iTunes in Prague and again last night on Bluray. There are one or two new scenes but it’s basically the theatrical cut with each interesting scene (which is nearly every one) running a bit longer. Some seem to go on a bit too long, but with a film like this “talkier” is generally better. In my mind the added length makes it a tastier, more satisfying meal all around. A cold meal, of course — The Counselor pretty much revels in its lack of compassion. But there’s no doubting this is one clear hard diamond — philosophically precise and commanding and unyielding and even (I know how this sounds) oddly personable in a perverse sort of way. I’ve posted a ton of material on this film, and we’ve all agreed that The Counselor doesn’t deliver the payoff that audiences tend to go to movies for. It is nonetheless a smart, well-engineered, well-oiled, first-class thriller-cum-philosophy lecture piece that comes from the pit of Hell. The Counselor is about as strong and uncompromising as a film of this type can theoretically get. 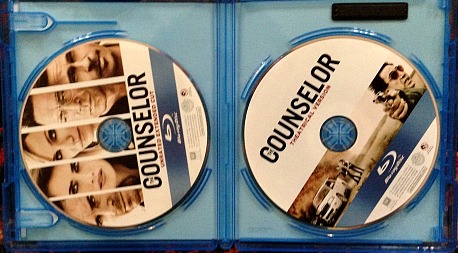 The following is a partial ripoff of the new material, but also my own best recollection: (1) The opening bedsheet scene between Michael Fassbender and Penelope Cruz runs longer; (2) More dialogue between Fassbender and the Amsterdam diamond dealer (Bruno Ganz) with allusions to Ganz’s Jewish heritage; (3) A longer conversation between Fassbender and Javier Bardem regarding women and temptation and the dark nature of the drug business; (4) The kid on the motorcycle (i.e, the Green Hornet) has a chat with someone, talks about dog food (not really necessary); (5) Reiner tells Fassbender a story about a guy who got into trouble by coming on to the wrong woman in a nightclub (i.e., avout the same as in shorter cut); (6) The Cameron Diaz car-humping scene is described in a bit more detail; (7) A new scene where Cruz tells Diaz about a dream she had; (8) Wounded fake cop (i.e, guy who’s stolen the septic drug truck) receives medical patch-up at the junkyard; (9) After Reiner’s murder the cheetahs mosey over to a backyard swimming pool and scare a couple of kids; (10) A longer conversation between Fassbender and the big drug kingpin — the latter explains that Fassbender is toast and that nothing can be done; (11) A new scene in which paramedics pick up Brad Pitt‘s body after the bolito killing, and his head falls off; (12) A longer closing discussion between Diaz and her banker, ending with her saying she’s “famished.”

February 20, 2014by Jeffrey Wells12 Comments
« Previous post
Not Cute, Over Their Heads…Fail
Next post »
“I Will Not Be Destroyed”