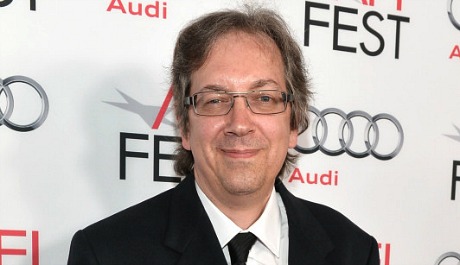 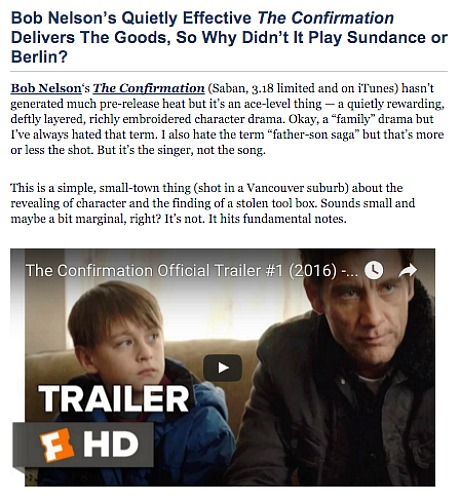 Nelson speculated that perhaps his film struck Sundance programmers as being a bit too much of a family thing, which it definitely isn’t. Okay, superficially but not really. It’s basically a kind of Bicycle Thief remake — i.e., a struggling father (Clive Owen) and son (Jaeden Lieberher) on the hunt for a stolen tool box that dad needs in order to survive. It’s also about the exceptionally mature son assessing the way things really are in the world, and about small-town values and the quality of things slowly ebbing away (socially, aesthetically) and about the shadow of alcoholism and drug addiction, and what it’s like to be genuinely anxious about making ends meet.

Nelson also mentioned that Sundance programmers are understood to be more receptive to films that don’t have distributors. The fact that Saban Entertainment acquired The Confirmation last September may therefore have been a factor in the snub….maybe.

From last Friday’s review:  “This is a quietly rewarding, deftly layered, richly embroidered character drama. Okay, a ‘family’ drama but I’ve always hated that term. I also hate the term ‘father-son saga’ but that’s more or less the shot. It’s a simple, small-town thing (shot in a Vancouver suburb) about the revealing of character and the finding of a stolen tool box. Sounds small and maybe a bit marginal, right? It’s not. It hits fundamental notes.

“I’m telling you this is one of the best films of this type that I’ve seen in ages.”

March 14, 2016by Jeffrey Wells7 Comments
« Previous post
One-Night-Only Return of Smell-o-Vision
Next post »
What’s The Ugliest Part of Your Body?