Charlyne Yi is a fascinating reason to see Paper Heart, a lightweight faux-documentary that costars (in the dreariest, least assertive way possible) Michael Cera. Fascinating because she represents a relatively fresh sensibility among comedians (if that’s what you want to call her), which is to say a comic who’s better at making you cock your head and go “wait…is that it?” than getting laughs.

She’s a kind of shtick-free permutation of a 21st Century Andy Kaufman — a curious comedian whose strangely undeveloped (i.e., arrested) childlike personality is about behavior and conceptual weirdness and being button-cute in a kind of hospital-gown One Flew Over The Cuckoo’s Nest way.

Her weirdness is underlined at the very beginning of Nick Jasenovec‘s film, which opens today, when she’s seen asking several people if they “believe” in love while saying time and again that she doesn’t. That’s interesting to hear from a 23 year-old, but the film never provides a hint about why Yi is so averse to, as she puts in in the press notes, “love at first sight” or any of that “Julia Roberts/English Patient/sobbing in the rain stuff.”

There has to be a story behind this (or a series of stories) but instead this made-up (or at the very least unconvincing) doc-with-marionette-sequences presents Yi as some kind of plucky little chipmunk-cheek alien with a pixie grin and nary a thought of any depth or consequence, or any kind of semi-developed curiosity. She doesn’t seem rooted in any sort of recognizable experience. She’s like a cyborg programmed to be “different” for its own sake. And that voice…my God! It’s like she decided years ago that she didn’t want to move past the emotional state of being eight or nine years old.

Every little girl knows something about love — families and pets and rock-star worship start them out, and then sooner or later, usually by the time they’re 16 or 17, they start to experience a semblance of the real romantic version (with a boy or a girl…whatever). It’s a common enough thing that if a woman turns 23 without having ever felt or tasted, even briefly, that curiously heightened state of hormonal-and-spiritual arousal, and in fact has come to a decision to be foursquare against it as a concept, then you’re talking about someone with a relatively unique history, and one you’d like to hear about. 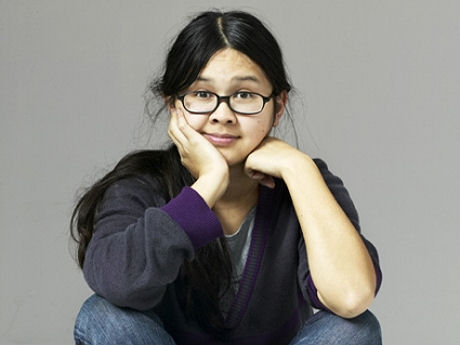 You look at Yi and figure, okay, she’s not conventionally “hot” so she hasn’t had much action so far, and she’s obviously invested in being a curio type so naturally she would create a character who’s atypical but still…there’s nothing here except nerditude. Not in the film, at least, because it provides no answers, no layers, no payoff…zip.

What happens is that she half falls in love, puppy-dog style, with Cera, the biggest and nerdiest 20something one-tricky-pony in the film business. Really — the sameness and underwhelmingness of the man is almost stunning. He has this clever deadpan/dorky space-cadet thing going on — obviously very bright, a little bit “cute”, a little smartass, a little aloof/withdrawn and topped with a mall-nerd haircut that infuriates me. He was perfect in Superbad — wise, sly, an almost transcendent figure — when paired with the hyper, motor-mouthed Jonah Hill. He was agreeably whatever in Juno but since then seems to have…I don’t know, calcified or something.

Which isn’t to say Cera isn’t lightly likable and “appealing” in a bright-but-vacant sense, but I predicted last September that he might be two or three years from being over, and I see no reason to back away from this. He doesn’t do anything other than radiate that same old Cera-ness , over and over and over. You have to do more than this to stay in earth orbit. You can’t just be a zone case.

But I say again that Yi is worth watching and reacting to. She’s got an original vibe that deserves your contemplation. I’m not sure that she has anything to say or put across other than odd quirk, but she’s got something, whatever it is. Something a bit more, I mean. An otherness that you can’t quite dismiss. Or which at least is more interesting than Cera’s.