Two scenes dissipate John Frankenheimer‘s Seven Days in May (’64), an otherwise gripping thriller about an attempted military takeover of the U.S. One of them is fairly ludicrous in its action plotting, and both take your attention away from the story by suggesting that the film was made for a modest sum — something an audience should never be allowed to contemplate. 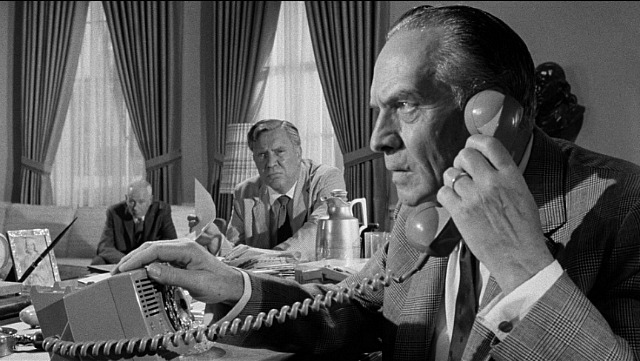 (l. to r.) George Macready, Edmond O’Brien and Fredric March in a second-act scene from John Frankenheimer’s Seven Days in May.

#1: President Jordan Lyman (Fredric March) and a team of anti-conspiracy allies are watching filmed footage of two Pentagon higher-ups (including John Larkin‘s Col. Broderick, a close confidante of Burt Lancaster‘s General James Mattoon Scott) spying on the President’s vacation home from a rowboat. Someone notes that the conspirators must be small in number or else why would Broderick, a Pentagon bigwig, be engaged in routine surveillance work? And it hits you that this whole menacing conspiracy is a small-scale affair. Just six or seven middle-aged men on either side, playing for opposing teams. The film needed a scene or two demonstrating the overwhelming military power that the bad guys had at the ready. Jets, tanks, warships, armed battalions.

#2: A nighttime scene at a secret New Mexico air base (“Site Y”) being used by the bad guys shows Colonel William Henderson (Andrew Duggan) escaping with Senator Ray Clark (Edmond O’Brien) in an open-top military tank. Henderson rifle-butts a soldier and guns the tank over a sand dune and into the night. And nobody chases after them? Site Y security chiefs presumably have all kinds of jeeps and helicopters at their disposal, and they can’t catch a tank driving through the desert at 35 or 40 mph? Broderick and O’Brien should’ve escaped in a chopper. That I would half-buy.

A Seven Days in May Bluray popped on 5.2. From DVD Beaver’s review: “The 2003 Warner Home Video DVD was quite adept, and the source of that disc has been used for Bluray. It advances detail and contrast — it’s brighter, has plenty of depth and looks significantly more film-like, although still in the 1.78:1 aspect ratio.”

HE note: The Bluray would look that much better if the WHV guys had presented SDIM in 1.66:1, an aspect ratio used for the laser disc and Bluray of Frankenheimer’s The Train, which was released theatrically on 3.7.65.