One of my most keenly anticipated Sundance ’18 films is Paul Dano‘s Wildlife, an adaptation of Richard Ford‘s same-titled novel, published in 1990 and set in 1960 Montana.

The main costars are Jake Gyllenhaal and Carey Mulligan as the married Jerry and Jeanette Brinson; the secondary performers are Ed Oxenbould as their son Joe, and Bill Camp as — here comes the rough part — an older, richer guy named Warren Miller whom Jeanette, believe it or not, has an affair with when Jerry, having lost his country-club job, leaves the homestead to become a firefighter. 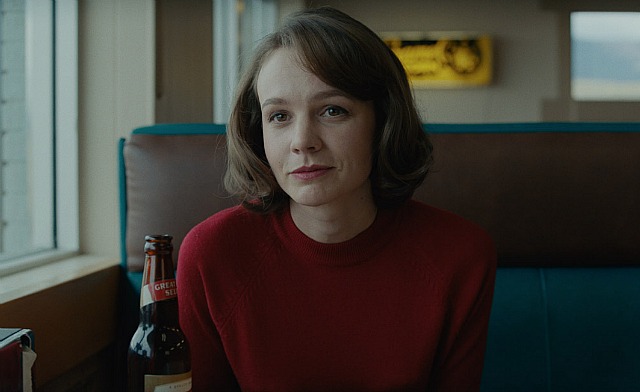 Carey Mulligan as Jeannette Brinson in Paul Dano‘s Wildlife, which will debut during Sundance ’18.

The official Sundance summary sidesteps the nitty-gritty. For a fuller understanding of where this film goes and what it delivers, consider a N.Y. Times review of Ford’s book by Christopher Lehman-Haupt:

“‘In the fall of 1960, when I was 16 and my father was for a time not working, my mother met a man named Warren Miller and fell in love with him.’ So begins Richard Ford‘s disturbing new novel, ‘Wildlife’. In it, Mr. Ford seems to have bitten off more than he can chew. Its action takes place in Great Falls, Montana. The theme, too, is a familiar one in Mr. Ford’s work, a love triangle involving a mother, a father and a son.

“The 16-year-old narrator is Joe Brinson. His father is a professional golfer who teaches at a country club in Great Falls. He is a natural athlete ‘with delicate hands and a short fluid swing that was wonderful to see but never strong enough to move him into the higher competition of the game.’ This is a perfect image for the searching innocence of Joe’s father, who has brought his family from Lewiston, Idaho, ‘in the belief that people — small people like him — were making money in Montana or soon would be, and wanted a piece of that good luck before all of it collapsed and was gone in the wind.’

“But instead of luck the wind brings fire, a forest fire that rages on to the west of Great Falls and even threatens Joe Brinson in his dreams. When his father loses his job at the country club, instead of looking around for another golf job he joins the men who are fighting the fire. It’s as if he’s tired of playing life safe up the middle of the fairway. He wants to confront something that is out of control.

From this point on the fire takes over ”Wildlife.” It burns so fiercely that not even nature can resist it. ‘I saw a bear that caught on fire,’ Joe’s father tells him when he telephones home. ‘You wouldn’t have believed it. It just blew up around him in one instant. A live bear in a hemlock tree. I swear. He hit the ground squalling. It was like balled lightning.’

“Joe’s mother, enraged at her husband’s escapade (‘I said you don’t know anything about fires…you’ll get burned up’), permits her own passions to run out of control. An apparently sensible woman who once worked as a substitute teacher of math and science, she takes up with the man named Warren Miller.

“But now the going gets tricky for the reader. Seen through the narrator’s eyes, Warren Miller is thoroughly repellent. He’s old, he’s false in manner, he’s a bigot, he walks with an ugly limp. He clearly wants to befriend Joe simply to seduce his mother. Though he is rich and influential in Great Falls, though Joe sees that his mother liked Warren because ‘he knew things,’ though Warren himself explains, ‘She was throwing things up to see where they’d land,’ still, it is hard to understand how she could be attracted to such a man.

“But something is going on in their courtship that the narrator does not seem to understand. Joe’s mother is flagrantly provoking him. She takes him along on a date with Miller. Several times in the same evening, she all but invites Joe to watch her making love to Miller. And then later that night she slaps him for being aware of what’s going on.

“‘I didn’t try to move or raise my hand or do anything,’ he reports. ‘Her bathrobe was open in front, and she was naked underneath. I could see her stomach and all of that. I had seen my mother naked before but this was different and I wished that she had her clothes on.'”