Repeating again HE’s standard laments about Best Picture voting among guilds and Academy members: (a) For decades AMPAS members have made themselves infamous for succumbing to soft, tepid emotional impulses, which is largely due to the preferences of deadwood members — the over-the-hill crowd that doesn’t work that much (if at all) and whose tastes are conservative, smug and myopic; (b) Most Academy voters tend to vote like abused, emotionally-needy children; (c) The Academy almost always goes for Emotional Push-Button films (EPB) over Esoteric Think Pieces (ETP) with occasional exceptions or detours for films made by Way Overdue Artists (WOA); and (d) EPB films (otherwise known as films that meet the all-important Steve Pond criteria) are ones that deliver that “big thing”…that lump-in-the-throat feeling that melts you down by delivering some profound bedrock truth about our common experience.

And by this standard or tendency, the feeling seems to be that the latest well-received EPB (Selma) may be strong enough to be nominated, and that the strongest ETP (Birdman) hasn’t a chance against the still-leading EPBs (The Imitation Game, The Theory of Everything) and that A Most Violent Year, while brilliantly made, is essentially a Sidney Lumet-cloned ETP that doesn’t speak to our 21st Century mood or situation as much as address a specific New York culture of 30-plus years ago, which is what makes it “thinky”. And that Boyhood is still everyone’s favorite #2 or #3 or #4, and that Whiplash is far and away the choice of the under-35s, whose viewership is needed for the Oscar telecast, and that Interstellar might slip in with a Best Picture nom but it won’t win anything more than a tech Oscar or two. It should also be noted that many are clinging to the belief that Unbroken will clear the table when it finally screens on 11.30. Is that more or less it? Maybe so, but for the 79th time I have to say it feels humiliating and degrading to sit around wondering what the deadwooods will like. 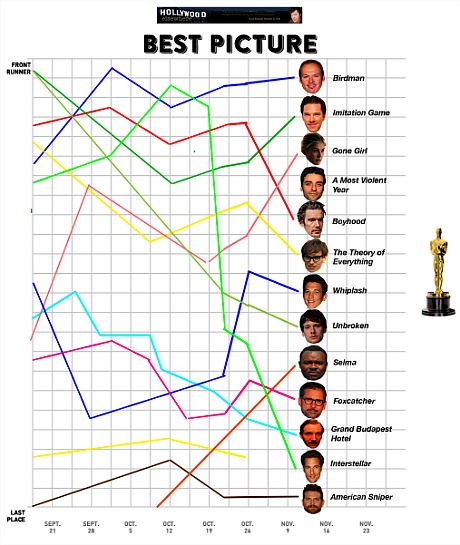