As a sentimental gesture to one of the late Roy Scheider‘s best performances, this afternoon I bought an old DVD of William Freidkin‘s Sorcerer (’77). It looked much worse than expected. Released by Universal Home Video in November ’98, the disc has muddy sound, a 1.33 to 1 aspect ratio that seems to trim out a fair amount of what was originally shot, and a crudely mastered appearance that’s way too coarse and grainy. I saw Sorcerer at a good theatre when it first came out. The DVD is a desecration. 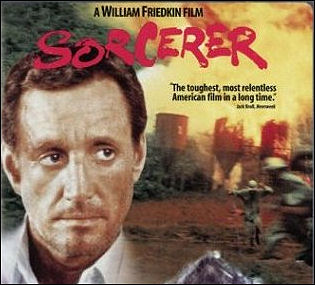 Some think Sorcerer is a masterpiece. It’s not, but it has a wonderfully intense atmosphere (sweat, mud,humidity, mosquitoes) and more than a few great scenes. The ten-minute-long scene with the two trucks crossing the rope bridge in the rainstorm is worth the price alone. It should be re-mastered and re-issued with a voice-over commentary from Friedkin and a making-of doc, at the very least.
It’s Friday night and the Universal Home Video team has gone home, but maybe a new DVD is in the works. An IMDB chit-chatter wrote last summer that Freidkin said during a visit to the ’07 Munich Film Festival (which did happen) that “he had [recorded] an audio commentary” for a new Sorcerer DVD.