36 hours ago Awards Daily‘s Sasha Stone, who’s doing Cannes for the first time, wrote the following: “Cannes smells like coffee, cigarettes and the sea. On days where it’s bright and warm, you are caught with brief glimpses of the white caps in the waves and the reflection of the sun on their surface. Those are the moments you wish you were sipping good rose on someone’s yacht, dressed in flowing white linen and watching the peons mill around on shore. 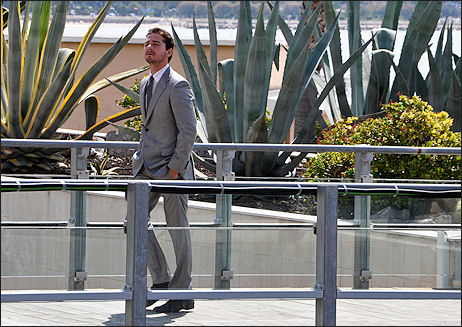 Wall Street 2 star Shia Lebeouf a couple of days ago.

“What I see mostly are tired, hard-working journalists hunched over their laptops tapping out reviews or stories, and photographers resting their gigantic chunks of lens and plastic near their computer as they upload the many shots they got of the talent — it doesn’t matter to them that much whether it was a movie star or [not].

“The photographers wait wherever the talent will be coming through the door or walking down a corridor — but it is never so frenzied as it is surrounding a high profile movie like Robin Hood or, even more so, Wall Street 2. I suspect the Woody movie will be even more intense. And not just because the Woodman will bring with him a spectacular looking cast but because he’s Woody — a mythic figure.

“You will not find a nicer group of folks than those who work as the staff here.

They are so pleasant and helpful. If they have to tell you something more than that, they just chatter at you in French without asking whether or not you speak the language. And then you stand there, confused until the message is made clear with a pantomime or a drawing. They have not lost patience with any of us yet.

“Last night, I spent a few hours chatting with In Contention‘s Guy Lodge — a charmer, to be sure. After a few drinks with Hollywood-Elsewhere’s Jeff Wells we found our way down to the beach where the public screenings (open to anyone) debuted with From Here to Eternity. It was uncharacteristically cold, however, so we could only stand there for a bit — even with the rose and beer warming our blood it was too much. Montgomery Clift, though. Montgomery Clift.”