Here’s an mp3 of a three-question chat with director Mike Nichols at MOMA about 45 minutes ago. He was there to kick off a two-week retrospective of his films. I began by mentioning production designer Richard Sylbert, who worked with Nichols on The Graduate, Catch 22 and Carnal Knowledge, among others. We ended by discussing The Fortune, his 1975 bomb that costarred Jack Nicholson, Warren Beatty and Stockard Channing (and which Nichols says he still doesn’t care for). 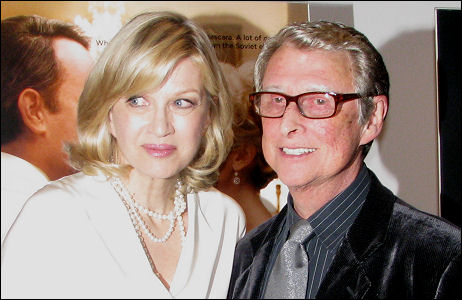 Diane Sawyer, Mike Nichols outside MOMA’s Titus theatre prior to this evening’s launch of a two-week Nichols retrospective.

My middle question was whether he’d be interested in directing that possible HBO narrative film, just announced as a possibility today, based on the 2008 election. In the same vein, I was thinking, as his work on Primary Colors.

Here’s his answer: “I would never again do a movie based on real life. It’s too hard. You can’t find a metaphor. You have to do what happened, and you’re chained to a series of facts. Or even pseudo-facts. It doesn’t matter [because] it’s what everybody thinks happened. And you can’t examine the story and find out what the secrets are. You have to turn yourself inside out to turn it into a metaphor and make it into a movie, but it’s really hard.”