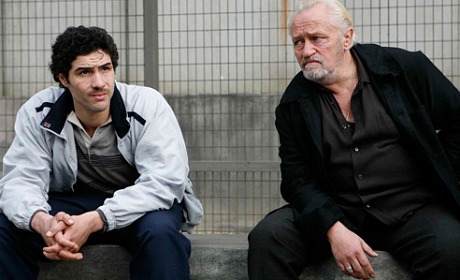 Niels Arestrup, winner of LAFCA’s Best Supporting Actor award for his work in A Prophet, is the snarly old buzzard on the right; A Prophet costar Tahar Rahim is on the left.

Again — nobody in my realm pre-approved this in any way, shape or form. Secondly, Arestrup is quite effective in the film, but his performance is not what anyone would call “oh, wow!” stupendous. He plays a French criminal-class guy in typical French-criminal-class fashion. He’s gruff and blustery — an aging barking dog who’s trying to hide the fact that he’s terrified of losing his hold on power. And always with the cigarettes, the cigarettes, the fucking cigarettes. It’s a very oddball call.

HE approves of Animal Kingdom‘s Jacki Weaver winning for Best Supporting Actress, and would have also high-fived the runner-up, Ghost Writer costar Olivia Williams, if she had prevailed. LAFCA’s Best Screenplay award went to Aaron Sorkin for “The Social Network. The Best Documentary Award went to Last Train Home, which I never even saw. The Best Doc runner-up, Exit Through the Gift Shop, should have taken it.

The Best Music Score award was split between Ghost Writer‘s Alexandre Desplat and The Social Network‘s Trent Reznor and Atticus Ross. The Best Production Design award went to Inception‘s Guy Hendrix Dyas with Eve Stewart coming in second for her work on The King’s Speech.