Moviegoing would be an immeasurably richer thing if exhibitors were to allow the showing of an occasional brief short before the feature. I know…fat chance! But Venice Film Festival audiences saw a “beguiling” 13-minute short film titled Hotel Chavalier — directed by Wes Anderson, costarring Jason Schartzman and Natalie Portman — just before the showing of The Darjeeling Limited. Very cool, and thematically linked yet! 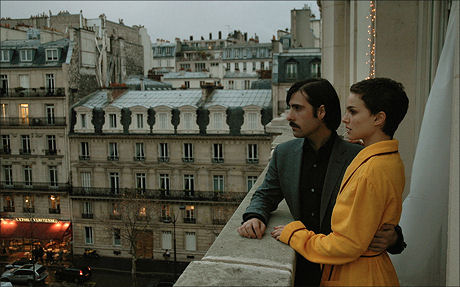 But Chevalier will not, according to trade reports, be shown in theatres along with Darjeeling when it opens on 9.29 — only at other festivals (i.e., the New York Film Festival), on the internet and eventually on the DVD. Bad call, guys. A pre-feature Chevalier hors d’oeuvre would lend a special dimension — an “echo” or rebound effect — to Darjeeling. Fox Searchlight should definitely reconsider. At least show it at the upscale venues — Landmark, Arclight, etc. — where such a novelty would be appreciated.