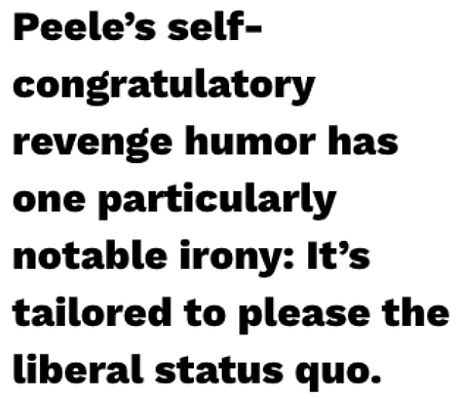 Imagine the SJW Twitter response if a white critic had written the following: “That disingenuous tease is extended in Peele’s casting of Daniel Kaluuya. A son of Ugandan parents, the handsome, round-faced, British-born actor triggers sympathy (he has the young, clean-cut buppie co-ed look that brothers Branford and Wynton Marsalis rocked in the ’80s). But Kaluuya’s strongest historical associations must come from Peele’s subconscious: The actor’s dark-skin/bright-teeth image inadvertently recalls the old Sambo archetype.

“Kaluuya frequently goes from sleepy-eyed stress to bug-eyed fright. Surely Spike Lee would have recognized the resemblance to Stepin Fetchit, Mantan Moreland and Willie Best, the infamous comics who made their living performing Negro caricatures during Hollywood’s era of segregation. Peele seems too caught up in exploiting modern narcissism to notice old repulsion. Sambo lives matter.

“Question: Will Kaluuya’s wild-eyed consternation be equated with James Baldwin’s bug-eye perspicacity in I Am Not Your Negro?”

February 24, 2017by Jeffrey Wells10 Comments
« Previous post
Sunday In The Park With Jake
Next post »
“Down The Wrong Pipe”