"No Gimmicks, No Tricks"

Last night I paid to see A Better Life — paid! — for the second time. (My first viewing was at the Santa Monica Aero on June 7th.) It was playing at Arclight #11, and after the show — totally sold out, by the way — director Chris Weitz and star Demian Bichir dropped by for a q & a. And then they were swamped in the lobby outside for photos and chit-chat. 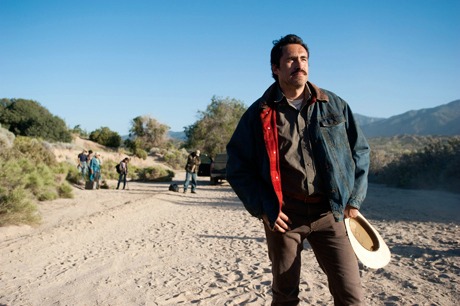 A second viewing doesn’t diminish A Better Life in the least. If anything it seemed to play a bit cleaner and stronger. I wrote on 6.8 that “it’s genuinely moving, if a little too grim and deflating at times.” Well, the grimness and deflation were gone last night and replaced by a kind of dignity and austerity and emotional truthfulness that’s really quite rare in mainstream movies today. I realized this during my first viewing, but perhaps not fully enough.

“I fell in love with [the script] the first time I read it,” Bichir tells Vanity Fair‘s Sasha Bronner. “It was so powerful and so well written. No gimmicks, no Hollywood tricks. It was the real thing. And then the character was one of those characters that you’re looking for in your life. That’s a Hamlet, that’s a King Lear, that’s one of those bigger-than-life characters, that’s Travis in Taxi Driver. It’s many, many characters in one.”