No Guts, No Glory

“If you thought Abu Ghraib was a laugh riot then you might love Observe and Report, a potentially brilliant conceptual comedy that fizzles because its writer and director, Jody Hill, doesn’t have the guts to go with his spleen.” — from Manohla Dargis‘s 4.10 N.Y. Times review. 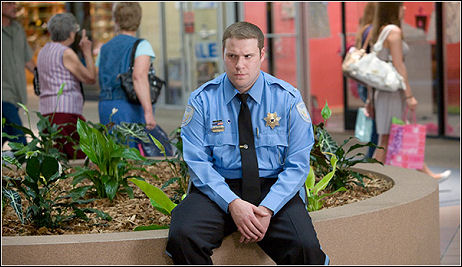 “Observe and Report might have been an interesting film if Hill had committed to the dark side and stayed there, but he wants it both ways: to get laughs for being mean and to shake it off and say, ‘No, I was just being goofy and playful.’ But Ronnie isn’t a playful construct; he’d be fascinating if there was consistency to him, if Hill had the depth or the guts to stick with the vision he initially creates. But Observe and Report wants it both ways and ends up with neither.” — from Marshall Fine‘s 4.10.09 review on Hollywood & Fine.

“Hill is a copout compromiser who lacks the courage of his interests and instincts. He’s made a semi-dark nerd-psychopath comedy and (just to be safe) a moronic, logic-free, dumb-ass Paul Blart comedy with an infuriating finale. Particularly for a film that is supposedly delving into the dark side and dealing with human derangement with at least a semblance of bluntness. — from my own 4.7.09 review, called “Citizen’s Arrest.”

The finale “ends on a note of triumph that’s curiously out of keeping with the movie’s own logic. All along we’ve been watching Ronnie slowly hoist himself on the petard of his own unchecked aggression. For there to be even a hint of redemption throws everything that came before into question, and breaks an unwritten contract with the viewer. What’s meant (I think) to be a ‘fuck you’ to action-movie conventions reads instead as a ‘fuck you’ to the audience. Observe and Report tickets should come with a free breath mint, because however hard you’ve been laughing, that ending leaves a seriously bad taste in your mouth.” – from Dana Steven‘s 4.10 review on Slate.